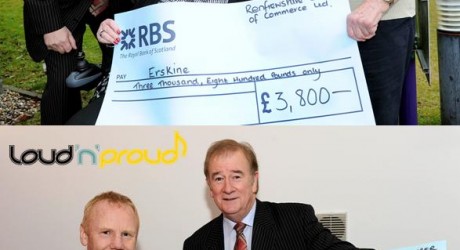 RENFREWSHIRE Chamber raised £16,000 for local charities in the last year, the most it has ever raised.

Chamber president, Tom Johnston, head of Retail (Scotland) for Colliers International, born in Renfrewshire himself, having been raised in Inchinnan and now living in Bridge of Weir, recently presented our two charities of the year with their cheques.

The money is raised from the ROCCOs, the Chambers Annual Business Awards held in November and the Chamber’s Christmas Lunch.

Erskine, founded in 1916, has provided nursing and medical care for former members of our Armed Forces through two World Wars and the more recent conflicts and peace keeping initiatives.

Loud’n’Proud, Renfrewshire’s resident School of Rock, is a youth charity that has, for over seven years now, established itself at the forefront of the development of young musicians in Scotland.

It is a place for talented hard working young musicians and performers to thrive.

Tom presented the cheque to the manager and founder of Lound’n’Proud, Tommy McGrory.

Comment on presenting the cheques, Tom said: “We are delighted to do our bit; the monies raised will support two great charities right here in Renfrewshire.

“We also continue to support, albeit at a smaller level, other local charities throughout the year as well. Whilst the money raised has been excellent, we aim to raise even more for next year, especially as the Chamber continues to grow with January having been our best month ever, with 30 new members joining our Chamber – proof that we really can and are helping Renfrewshire ‘grow & prosper’.”

Renfrewshire Chamber of Commerce · Charity and the voluntary sector ·