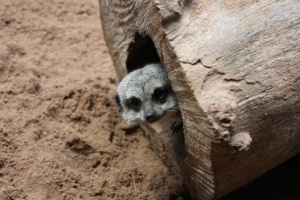 THE Royal Wedding is almost upon us, and – with the Royal couple due to visit St Andrews this Friday – ‘Kate & Wills’ mania has the country firmly in its grip.

For St Andrews Aquarium, which is situated in the Scottish town where the couple first met, ‘Kate & Wills’ mania is taking on very different form indeed.

Kate & Wills are, in fact, a couple of meerkats that have recently arrived at the Aquarium, and are proving a big hit with visitors far and wide.

John Mace, manager of St Andrews Aquarium, commented; “The meerkats arrived with us in January and have been settling in nicely.

“We decided to call them Kate & Wills in honour of this year’s Royal Wedding and also in light of the fact that the couple met in St Andrews and that meerkats are, in fact, native to Africa, the continent where Kate & William got engaged.

“Kate & Wills are proving to be a big hit with visitors from both Scotland and much further afield and we’re expecting, as interest in the royal wedding grows, that we’ll continue to get more and more visitors to St Andrews where they both first met.”

Kate & Wills are joined in their African enclosure by a third meerkat who is, as yet, nameless and is waiting on the schoolchildren of Fife to name him in a competition that will run locally later this month.

The Aquarium, which also operates as a unique evening venue for many university functions, was a regular haunt of the couple when they were studying at St Andrews.

It has recently undergone significant developments and boasts a number of new exhibits which include Kate & Wills’ meerkat enclosure, a shark pool and some of the world’s most dangerous aquatic creatures.

Members of the public can find out more about Kate & Wills the meerkats on the Aquarium’s facebook page at: www.facebook.com/fifeaquarium.