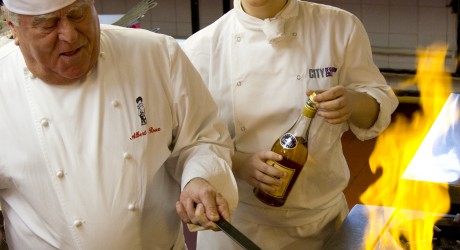 The fundraising event which took place at Scholars’, the popular college training restaurant on Cathedral Street, was attended by the great and good of Scottish hospitality, including top chefs, hoteliers and restaurateurs; in addition to a group from HIT Scotland, who recently conquered Mount Kilimanjaro to host the world’s highest group Burns Supper.

Gordon McIntyre, head of Hospitality at City of Glasgow College, concluded: “The event was a great success – great food, great company and over £500 raised for HIT Scotland.

“It was a great honour to have such an icon of the hospitality industry with us, not only for lunch, but also for our students who had the opportunity of working alongside a true legend of our industry.”

Willie McCurrach, head of Food at City of Glasgow College, added: “Albert Roux has given our young people a once in a lifetime opportunity – his presence, support and coaching is something our students will treasure forever, as will the guests who enjoyed such fabulous food and service.”

Albert has always been keen to develop and encourage fresh talent in the industry observing “a college like this is absolutely vital and I hope my visit was useful”.

Commenting on his masterclass, Albert said: “It was gratifying to see the enthusiasm of the students. They are determined and I have high hopes for them – they are the chefs of the future.”

David Cochrane, chief executive of HIT Scotland, said: “The chance to meet one of the world’s best chefs was a wonderful opportunity for the students.

“It’s an experience that I hope will encourage them to reach the top of their profession in the future.

“HIT Scotland is very grateful to City of Glasgow College for their financial support but for also organising a great event like this, which will inspire young talent in the industry.”

Student chef, Katy Dickson, said: “To cook with Albert Roux was a huge honour, although slightly nerve-wracking. He is one of the world’s best known chefs and has mentored so many top names including Gordon Ramsay and Andrew Fairlie. To think we could follow in their footsteps is really exciting.”

Albert and his brother Michel’s restaurant Le Gavroche was the first in the UK to be recognised with three Michelin stars. The Chez Roux Empire has been developing in Scotland, with restaurants in Inverness, Lochinver and Gullane.

For more information or images related to the event or City of Glasgow College contact Fiona Cochrane on 0141 566 4107 or email fiona.cochrane@glasgowmet.ac.uk

For more information on HIT Scotland or the Kilimanjaro expedition please contact Joe Walton at Real PR on 07968022684 or email joe@real-pr.co.uk.

City of Glasgow College was created on 1st September 2010 from the merger of Glasgow Metropolitan College, Central College Glasgow and Glasgow College of Nautical Studies forming Scotland’s largest college with a fantastic portfolio of over 2,600 courses.

Scholars’ is the City of Glasgow College’ licensed training restaurant. The restaurant is open five days a week from noon with a daily set priced menu offering an interesting choice. It is located at the Cathedral St campus and operates as part of the course programme for students who are working, or who anticipate working within the hospitality industry. Trainees are timetabled to cook and serve under the supervision of lecturers. Bookings are recommended on 0141 566 6212.

HIT Scotland is a Scottish based charity which raises funds to support and encourage excellence in the hospitality Industry. It provides scholarships to students and emerging talent working in Scotland in order to raise aspirations and standards in the industry. The charity recently awarded £250,000 worth of scholarships to 110 people, including four students from City of Glasgow College.

Albert Roux OBE has appeared in numerous TV programmes including cooking at home with the Roux’s. He recently supported and starred in the recent series presented by his son Michel junior, Michel Roux’s Service and has published many top selling cookery books.

The Roux scholarship was founded in 1985 by Albert and Michel Snr. Since its inception it has gained the reputation as the crème de la crème of culinary competitions for young ambitious chefs.

MEDIA RELEASE posted by City of Glasgow College. You too can post media releases (aka press releases) on allmediascotland.com. For more information, email here.