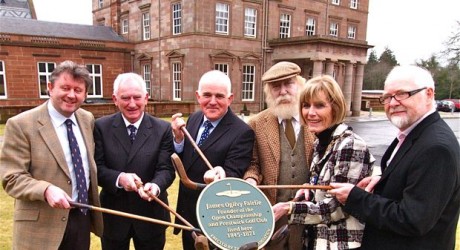 A PLAQUE to honour one of golf’s greatest sporting heroes has been presented to Coodham House, the former home of the man who created the world’s most famous golf tournament.

The Victorian country estate at Symington in Ayrshire, used to belong to James Ogilvy Fairlie, founder of the Open Championship and, as such, has received a commemorative plaque honouring historic heroes of the game.

Mr Jim Mather, Minister for Enterprise, Energy and Tourism, presented a Green Plaque on behalf of the Links Association, a not-for-profit organisation set up to champion links courses around the world, as a permanent tribute to Fairlie who lived at the house between 1845 and 1871.

Says a spokesperson: “Coodham House, which has been lavishly rebuilt to create four luxury apartments, two lavish duplex residences and three very individual designer homes ranging in price from £330,000 to £700,000, is just minutes from Troon, Turnberry, Dundonald, Prestwick and numerous other exceptional courses, including The Ayrshire – a new links course being planned for Irvine Bay.

“Five years of painstaking work has resulted in Coodham’s original A-listed external walls being meticulously restored or replaced, including the intricate roof balustrade and entrance pillars which lead to a spectacular Turkish marble hall and staircase while each apartment has been finished to the highest luxury standards.”

Said Malcolm Campbell, chief executive of The Links Association: “I’m delighted that a plaque commemorating James Ogilvy Fairlie and his contribution to the game of golf is to be erected at Coodham House.

“Coodham is absolutely magnificent and a real tribute to Fairlie. I’m sure he’d be delighted.

“Outside of golfing circles not many people know he was the man who inspired Old Tom Morris to build Prestwick and subsequently ran the first Open Championship way back in 1860. To create a tangible memorial to the man who inspired all of that at the house where he did a lot of the planning is fantastic.

“Fairlie, a former captain of the Royal & Ancient of St Andrews is the only man to win gold medals in competitions at the R&A, Prestwick and North Berwick.

“He was mentor to Old Tom, who acted as his caddy, and they were such close friends that Old Tom named his second son James Ogilvy Fairlie Morris.

“Fairlie and Old Tom regularly stayed at Coodham and played golf in the grounds while they were planning Prestwick. Both are giants in the history of golf so that’s what makes Coodham such a perfect location for the first Links Association plaque.”

Fairlie is the first in a number of great golfing heroes to be honoured by the Links Association which has plans to erect memorials to other golfing greats such as Freddie Tait from Edinburgh, two-times winner of the Amateur Championship and the Open Championship, and Allan Robertson from St Andrews, the first great professional golfer.

“We are delighted that Coodham has been chosen as the first location to be honoured by The Links Association as a Golf Heritage Site,” said Willy Findlater, of CDP Architects who carried out the work on Coodham.

“Coodham has a unique heritage and we have done everything in our power to return this magnificent country house to its former glory and beyond, as befitting its historical status.”