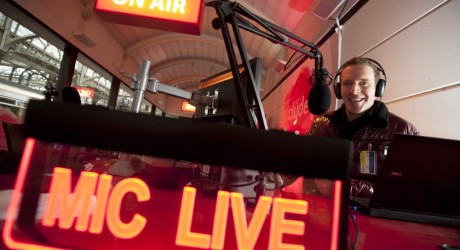 Ballroom Box Office is offering the prize of a life time to one lucky winner – the chance to win two tickets to 11 of the hottest gigs this year.

From a meet and greet with boyband Westlife at the O2 Arena in London to tickets and camping for hit music festival, Rock Ness, to Bon Jovi and Kings of Leon at Murrayfield, the exclusive prize is a dream come true for music lovers.

The amazing prize is part of Clyde 1’s Live on Location which will see the number one breakfast show George & Suzie in the morning being broadcast live from the concourse of Glasgow’s Central Station and the ballroom of the Grand Central Hotel.

Running from March 7th to 11th, George Bowie will be joined by a host of celebrities including The View, Wonderland, Craig Hill and Daniel Sloss.

Both visitors to the Clyde 1 website and listeners to the number one breakfast show in Glasgow and the West will have a chance to win Ballroom Box Office. Every day, five finalists will be selected for the finale in the Grand Central Hotel on Friday morning.

George Bowie, said: “Ballroom Box Office in the Grand Central Hotel is set to be an amazing end to our week of broadcasts from Central Station. Our lucky winner and a friend will leave straight from the hotel to take the train to London to see – and meet – Westlife that night.”

For more details about ‘Live on Location’ go to www.Clyde1.com.

Laurie Nicol, general manager at the Grand Central Hotel, said: “We are delighted to be part of Clyde 1’s Live on Location broadcasts – the Grand Central Hotel has a history of attracting the top stars so we are very excited to be hosting George & Suzie’s breakfast show in Champagne Central with performances throughout the week from The View, Wonderland, Craig Hill and Daniel Sloss.

“The Ballroom Box Office prize is incredible and we are looking forward to seeing one lucky winner pick up tickets for the hottest gigs around when the finale takes place in Champagne Central on Friday morning.”

The live broadcast is being run in partnership with Grand Central Hotel, Network Rail and Scotrail.

One lucky winner will win tickets for themselves and one friend to all of the following gigs:

Ballroom Box Office will be on Clyde 1 from Monday 7th March 2011.

Issued on behalf of Bauer Media by the BIG Partnership.