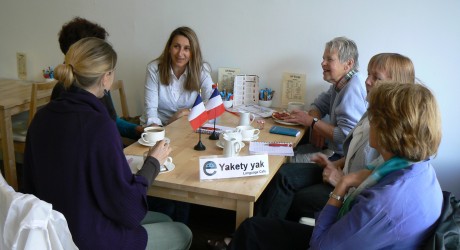 EDINBURGH is celebrating a ‘Year of Yakking’ in local cafes and bars.

Yakety Yak Language Cafe started when owner Fiona Gomes decided she would like to improve her foreign language conversation skills over a cup of coffee or a glass of wine rather than in the more formal atmosphere of a classroom.

At first, French and Spanish were offered, quickly followed by Italian and German.

Now, about 150 people come to Yakety Yak every week and yak in seven different languages, including Chinese, Portuguese and Russian.

Although there is no need to attend regularly – the sessions are ‘drop in’ – many people come to the same group every week to meet the other ‘regulars’ who have now become friends.

The chat can be about anything at all, so the native-speaking tutor is invaluable in helping with vocabulary and other aspects of the language.

Edinburgh resident, Rona Brown, says: “I have now been attending sessions for very nearly a year. It’s always good – the sessions are often lively and great fun – and there would be a huge gap in my life if Yakety Yak did not exist as I typically go to one French and one Spanish group per week.”

Fiona Gomes, who still goes to as many sessions as she can, says: “When we first started, I had no idea if the concept would work, but it does!  And I always enjoy our sessions.

“Not only have my languages improved immensely but I have met many interesting people and learnt so much from them – from what’s happening in Edinburgh to the traditional food of Ethiopia.  We chat about anything at all – the only rule is – NO HOMEWORK!”

Valvona and Crolla in Elm Row and Multrees Walk