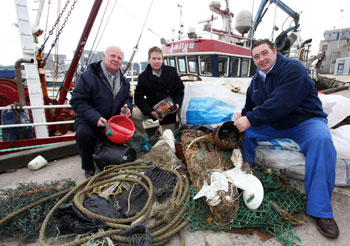 THE 200th tonne of litter removed from the North Sea as part of the acclaimed Fishing for Litter campaign was brought ashore at Peterhead this morning.

Says a spokesperson: “The scheme encourages fishing vessels to bring ashore rubbish they net whilst out at sea, clearing the waters of land-based litter such as plastic bottles and bags. Some of the larger items hauled in include fridges, mattresses, countless calor gas canisters and even an old mine.

“There are currently 162 boats involved in the campaign, which is spearheaded by KIMO, a pioneering environmental organisation that has contributed to a steady reduction in marine pollution in Europe’s seas. Seafood Scotland has been instrumental in promoting the initiative to vessels.”

The 200th tonne was brought into Peterhead by the langoustine trawler ‘Amity’, skippered by Jimmy Buchan, who appeared in the BBC ‘Trawlermen’ television series.

Jimmy said: “I have really seen the benefits of being involved in the Fishing for Litter scheme over the past few years, both from an environmental and a fisherman’s point of view.

“By removing litter from the sea, I am gradually finding less and less rubbish in the areas I fish.

“Plastic rubbish is a real problem for me because it can clog up the net and hinder the fishing process. I would like to see more vessels signed up to the scheme so that we can increase the good work we are doing.”

Tom Piper, KIMO UK co-ordinator, said: “I am delighted that the project has reached this milestone and hope we can now secure the remaining funding to ensure the future of the project.

“I would like to take this opportunity to thank all the crew members of the boats and the harbour staff who volunteer their time to clear the seas of litter and who make the project such a success.”

Joining Tom and Jimmy at the dock today was Nick Bates, retired Captain of Cunard’s Queen Elizabeth 2 and Queen Mary 2 and an ardent supporter of the campaign.

He added: “For too long people have used the sea as a dumping ground and campaigns like this have to be commended and supported to protect the oceans for all.”

Seafood Scotland is a trade organisation that markets promotes and develops responsibly caught Scottish seafood to maximise the value return to industry.

Seafood Scotland also acts as delivery partner for Seafish in Scotland and works closely with all sectors of the Scottish seafood supply chain, from catching and processing, through to retail, food service and consumption. It also encourages and facilitates those sectors to work together to deliver a quality product to the consumer.

Fishing for Litter is an active environmental response to the progressive increase of marine litters in the seas around Great Britain, Scandinavia and Western Europe. Through the participation of local fishermen, this project is designed to recover marine litter whilst raising awareness for the significant detrimental impact such waste can have on the marine environment.

KIMO (Local Authorities International Environmental Organisation) is an association of coastal local authorities whose goal is to eliminate pollution from the Northern Seas. The organisation’s members include 120 local authorities representing over six million inhabitants in Norway, Denmark, Sweden, the Faeroe Islands, the Netherlands, Belgium, United Kingdom, Republic of Ireland, the Isle of Man and has established a KIMO Baltic Forum involving five countries. KIMO UK is the United Kingdom network of the organisation and has a Secretariat based in the Shetland Isles.

The Fishing for Litter scheme is sponsored by SNH, The Crown Estate, The Scottish Government, Comhairle Nan Eilean Siar, Aberdeenshire Council, The Highland Council, Total E&P UK Ltd, Peterson SBS, and the Scottish Fisherman’s Trust. The project also benefits from the time given to the project by crew and the staff at all the participating harbours.