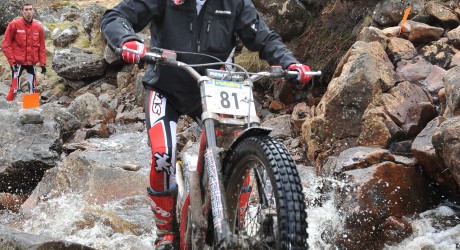 THE Scottish Six Days Trial (SSDT), the oldest surviving motorbike trial competition in the World, celebrates its centenary year in 2011 when it returns to the Highland town of Fort William from Monday 2 May to Saturday 7 May.

For six very special days 270 riders, both professional and amateur, from around the UK and across the globe will do battle in the purest test of man and machine. T

he fight to be ‘King of the Highlands’ in May is guaranteed to be a fierce affair as, irrespective of past or current status, every rider competing will be fully aware of the incredible prestige and exposure that winning the 100th edition of the SSDT will bring.

The sport of motorcycle trials is a test of riding skill over observed sections where the winner is determined by skill alone. When competitors ride each of the 30 testing sections every day their feet must remain on the footrests of the motorcycle. T

hey must negotiate steep gullies, slippery rock steps, rocky streams and boulder-strewn gorges. Sections vary in length and severity, and riders are penalised if they put their feet down to help them ride the section, and more so if they fail to negotiate the section in its entirety.

The Scottish Six Days Trial has the additional test of reliability over long distances, with riders completing up to 100 miles each day over a combination of rough moorland, rocky tracks and public roads; designed to challenge the ability, experience, strength and stamina of each rider and the reliability of the bike.

Over the last century thousands of riders have made this special journey to the enthralling and unmatched landscape of Lochaber – the ‘Outdoor Capital of the UK’, for a chance to tackle the unique and challenging Scottish Highland terrain alongside local riders who relish the opportunity to take on the World’s best on their home turf.

However, only the select few have the honour of having had their name etched on the famous winners’ trophy.

McGregor remains the only Scottish rider to ever win the SSDT, in 1932, despite Lochaber rider, Gary MacDonald’s huge modern efforts.

In 1980 Finland’s Yrjo Vesterinen became the first ever-overseas winner and in doing so began a new era of champions that would include Giles Burgat, Bernie Schreiber, Toni Gorgot, Thierry Michaud and Jordi Tarres, with only Britain’s Steve Saunders interrupting this prolonged foreign invasion.

In more recent times, the famous elegant trophy has remained predominantly in home hands thanks to the victories of multiple wins by Steve Colley, Dougie Lampkin, Graham Jarvis and individual successes by Sam Connor and 2010 winner Alexz Wigg.

The only exceptions to this recent run of British victors came in 2002 and 2003 when popular Spanish riders Amos Bilbao and Juan Pons took top honours respectively.

The Edinburgh and District Motor Club will once again be at the helm of this fantastic competition and will be responsible for upholding an event where club riders and the World’s best compete together over the same course that will include thirty boulder-strewn sections on each of the six days.

The event actually originated as a five-day reliability trial back in July 1909, before being extended to a six-day competition a year later. However, the start of the Scottish Six Days Trial (SSDT) proper as organised by the then newly-formed Edinburgh and District Motor Club began in 1911. In those early years, the trial started and finished in Edinburgh with the route taking the riders to John O’Groats and back over the course of the week. Fort William was introduced as the hub for the event in 1938, although the start and finish remained in Edinburgh, which continued to be the case until all links with the Scottish city were cut in 1977. Today, the SSDT consists of six different daily routes that total approximately 500 miles, which begin and end in Fort William each day.

For more Information on The Scottish Six Days Trial, go to: http://www.g2fgroup.com/html/ssdt/docs/SSDT100.pdf