Media Release: Award winners due to come to Scotland 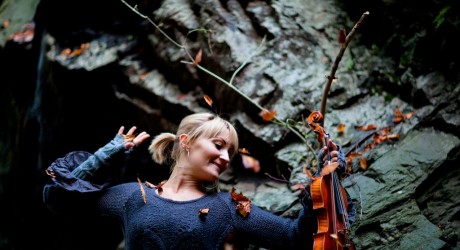 A NUMBER of award-winning acts are heading for Scotland from Scandinavia at the beginning of April.

They include a member of Norway’s winning team for Eurovision 2009, the Norwegian Folk Musician of the Year 2010 and two winners of Danish Folk Awards.

Anders Aasberg is a founding member of FRIKAR dance company, who won the Eurovision 2009 Choreography prize, along with the competition’s winning song – a rare double award!

The duo last performed in Edinburgh as part of the group ‘One Fine Day’ which brought together young musicians from Scotland, France, Sweden and Denmark.

Rounding off the set of winners is Sigrid Molestad and her band. Sigrid was named Norwegian Folk Musician of the Year in 2010. Her repertoire covers folk music of the Western fjords of Norway to blues to translations of Robert Burns songs.

Northern Streams organiser, Fiona Campbell, said “I’m pleased we have such a high calibre line-up to offer audiences and participants in Scotland this year.

“I’m also happy that we have been able to re-invite the performers who couldn’t make it last year, due to a certain Icelandic volcano erupting the day before the festival. They should be worth the wait!”

Northern Streams 2011 will run from 1-3 April in venues in Edinburgh and Glasgow. Further details on the concerts, workshops and sessions taking place are at www.eltmsa.org.uk.

We have included the following listing information for the Northern Streams Festival 2011 so you have it all in one place!:

Music, song and dance from Scandinavia and Scotland

Choice of two workshops per slot. Tune workshops suitable for any melody instrument.

£5 per child (children must be accompanied by an adult who can join in – and will be admitted free).

Come with us on a journey through music, song, dance and story drawing on the different traditions of Scotland, presented by James MacDonald Reid (Artistic Director of the Drumalban Folk Ensemble) and friends. Of Argyll origins, James has always been interested in Scottish traditions and how they connect to other traditions across Europe. Recently, he has been researching living Slavic and Norse folklore. This session is most suitable for ages five-plus but fun for all!

Your chance to learn from top Scandinavian and Scottish dancers

Norway: With many moves similar to breakdancing and streetdance, the traditional Halling dance form wowed Eurovision audiences when Norway won the 2009 song contest and choreography prize when performed by members of the group — Frikar. And now you can learn directly from one of those winners — Anders Aasberg.

Scotland: James MacDonald Reid and friends will give you an insight into and chance to try the older style of male Highland dance for yourself.

Denmark: The Dancing Danes, formed from top young dancers from across Denmark to perform internationally, will be teaching and demonstrating both couple dances and the rarer male Danish dances.

NB: Both male and female participants are welcome!

Ceilidh & Dance Performance 7.00pm. £8/6 (or free as part of day ticket). Indulge in a wee bit of dancing, music, song, story and seeing what has taken place at earlier sessions. Featuring performances of Norwegian Halling dance with Anders Aasberg, the male form of Scottish Highland dancing with James MacDonald Reid and friends, and the Dancing Danes. PLUS bring your dancing shoes to enjoy the fun with ceilidh dances in between with music and calling from John Somerville & co. All welcome!

Tickets for all Edinburgh and Glasgow events available through the Ceilidh Culture Box Office, Usher Hall, Lothian Road, Edinburgh: www.ceilidhculture.co.uk/www.usherhall.co.uk or tel: 0131 228 1155 or on the door. (NB: a small booking fee applies to web and phone bookings but not to those made in person).

Edinburgh Weekend ticket £32/£25: the two Edinburgh evening concerts and up to three Edinburgh workshops – save up to £12! (Please specify which workshops at the time of booking).

Glasgow Day Ticket £20/£15: the three workshops and ceilidh — save up to £9! NB: Weekend/Day Tickets only available from the Ceilidh Culture Box Office over the phone or in person or on the door.

PLUS Tuesday 12 April (and every second Tuesday of the month) TMSA Edinburgh and Lothians Branch Singers Session 8pm onwards The Royal Oak, Infirmary Street, Edinburgh EH1 1LT FREE! A chance to get together and sing in a social setting, this session is primarily for singers – unaccompanied or accompanied. To check dates and for more information: www.eltmsa.org.uk

to go directly to a document with these details.