Media Release: DJs get revved up for Cash for Kids 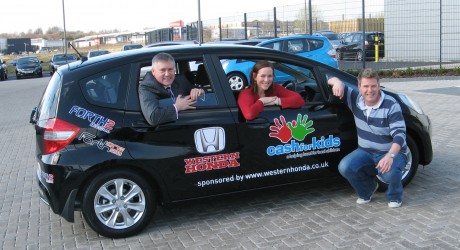 BREAKFAST DJs, Boogie and Arlene, got revved up at Fort Kinnaird today to mark the launch of a new sponsorship for Radio Forth Cash for Kids.

The duo attended a ceremony at Western Honda, which saw the local car dealership donate a Honda Jazz to the Radio Forth Cash for Kids team for one year.

The company, part of the Eastern Western Motor group, has selected the radio charity as its official charity partner for 2011/12.

The Honda Jazz has been branded with the Radio Forth Cash for Kids charity logo, and will be used by the team for its day to day activities.

Western Honda has a series of other events and initiatives planned for 2011/12 to help the charity in its fundraising efforts.

Ann Marie Miller, regional charity manager, Cash for Kids Scotland, said: “We would like to say a big thank you to the Eastern Western Motor Group for their extremely generous donation, which will be extremely beneficial for the charity over the next year.

“Radio Forth Cash for Kids works to support local charity initiatives for children who may be disadvantaged through poverty, neglect or abuse, and children who suffer from illness and disabilities, throughout Edinburgh, The Lothians and Fife.”

Fiona Larnach, group marketing manager at Eastern Western Motor Group, said: “We are absolutely delighted to announce Radio Forth Cash for Kids as our official charity partners of 2011/12.

“We decided to begin our annual sponsorship by providing a free Honda Jazz for the charity for the next year, which we hope will be a useful resource for the team.

“We have a whole host of other initiatives lined up to take place throughout the year to help raise funds for this extremely worthwhile, local cause.”

Issued on behalf of Bauer Media by The BIG Partnership.

About the Bauer Media Group

About Cash for Kids

The BIG Partnership · Charity and the voluntary sector · Edinburgh and East (postcodes EH, KY and TD)