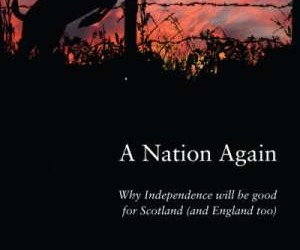 LUATH Press is delighted to announce the launch of A Nation Again alongside a debate on Independence with a special panel of speakers including John Swinney MSP, Paul Henderson Scott, Harry Reid and others on Wednesday 30 March from 5.30pm to 7pm Quaker Meeting House, 7 Victoria Terrace (above Victoria Street, access from George IV Bridge to the left of Hotel Missoni), Edinburgh.

The question defining a generation…

With contributions from some of the country’s most celebrated public intellectuals A Nation Again, edited by Paul Henderson Scott, includes essays from Harry Reid, Stephen Maxwell, Neil Kay, Tom Nairn and Betty Davies.

Contributors’ disciplines are broad, their approaches to the debate differ — be it political, historical, philosophical or personal — though a key denominator binds them: Independence must come.

It will be good for Scotland (and England too).

Here is the case for Independence. Here are the ideals that will shape our politics for the better.

A Nation Again is the defining document for our nation’s most important question.

MEDIA RELEASE posted by Luath Press. You too can post media releases (aka press releases) on allmediascotland.com. For more information, email here.