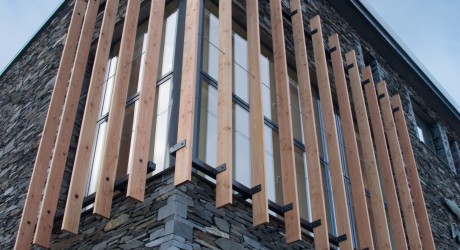 ARCHIAL, one of the country’s largest architectural practices and a member of the global Ingenium Group of companies, has been nominated for a Scottish Design Award for the Kingsland Primary School, at Neidpath Grazings in Peebles it designed for Scottish Borders Council.

Mark Fresson, director at Archial, said: “We’re delighted with this nomination for a school situated on a prominent site, effectively acting as a gateway into Peebles near Neidpath Castle on the edge of the town.

“Making the most of its location, the building has been designed to have a strong connection to the outdoors, with views out over Peebles to the South and East.

“When it comes to schools, the architectural profession is often guilty of repeating mistakes made by the Victorians; some schools are still designed with windows which are placed so that younger pupils simply cannot see out.

“Kingsland, in contrast, benefits from full-height glazing so pupils can enjoy the connection with the outside world. In keeping with this ethos, the building, where possible, is domestic in scale and height, creating an environment that is not intimidating to small children.”

The £8.5 million Kingsland Primary School accommodates more than 400 staff and pupils and contains 14 classrooms and a nursery.

With a timeless, Scandinavian look and feel, Kingsland’s classrooms are light and airy. Despite the fact that the structure is two storeys in places, 11 of its 15 classrooms have doors opening directly to the outside, emphasising the connection of the school to its semi-rural setting.

The front elevation of the school, which faces the road, is clad in dry stone walling, while the use of timber and white render lend a tactile, friendly quality to the building.

As the site has a steep north to south fall running across it, the design strategy was to hide the bulk of the school’s two-storey games hall by cutting it into the hill.

Since then, they have expanded to incorporate building and environmental design and form one of the biggest annual design events outside London. Winners will be announced at a ceremony on the 19th May.