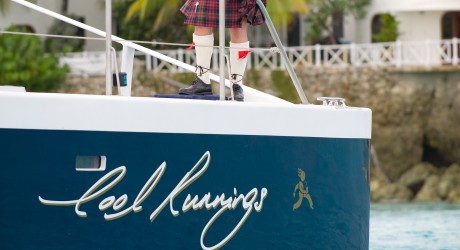 Two Scottish pipers will play in stereo at one of the most unique events planned for the enhanced Celtic Festival Barbados this year 23rd May.

PIPER, Martyn Graves, will play his pipes in stereo with Pipe Major Laura Simpson, from the balcony of one of the tastiest local restaurants in Barbados’ capital Bridgetown, Ryanne’s at 33 Broad Street, as the opening event for this year’s Celtic Festival on the sunny Caribbean island.

The brainchild of co-organiser, Colin Mackenzie, a Scottish entrepreneur, Laura will play alternative lines from Amazing Grace from the other end of the street.

Another new event planned for this year’s Celtic Festival Barbados from 23rd – 30th May 2011, is ‘The Games at The Garrison’, on Sunday afternoon 29th May from 3pm.

Sponsored by local brewer, BANKS, ‘B’ in the Park, and organised by local rugby club, the Scorpions, the games will offer a wide range of fun events for all the family – and is expected to attract hundreds of tourists visiting the island as well as local Bajans.

“Tug o’ War teams are sought from all corners, and competitors for the Cocoputt, Tossing the Palm Tree, throwing the welly, the coconut and ladle race and tons more fun events to be staged by local rugby club, the Scorpions,” says Scottish entrepreneur, Colin Mackenzie, co-organiser of this year’s Celtic Festival in Barbados.

Says a spokesperson: “The Garrison is home to the Scorpions RFC whose pitch is inside the famous horse race track which is so popular on this Caribbean island.

“And surrounding the race track is an unusual collection of restored canons carefully sought out from all across the island, and preserved by military historian, Major Mike Hartland.

“Several of these cannons are the famous Carronades, made in Falkirk Scotland!

“The Celtic Festival Barbados celebrates the historical connections between Scotland, Ireland and Wales and the sunny Caribbean island.

“Over 300 years ago, around the same time that rum was invented, Scots, Irish and Welsh criminals were given the choice of jail or a boat to the West Indies where they became slaves working in the sugar industry, or indentured servants in the big plantation houses.

“Descendants of these white slaves live in ‘Scotland’ district on Barbados on the wilder east coast – many of them are extremely poor, but some of the white descendants have done extremely well for themselves.

“These Scots earned themselves the nickname ‘red legs’ due to the effect of strong sun on tender white Celtic skin beneath their kilts!”

The spokesperson added: “Thousands of visitors from each of Scotland, Ireland and Wales, make their Barbados their holiday destination every year, and this is the most ‘revisited’ island in the Caribbean with a repeat visitor statistic of 43 per cent.”

Says Carol Anderson of The Business, co-organiser of the festival and a frequent visitor to the island: “Barbados is easily accessible with more than 20 scheduled flights a week in May, with British Airways and Virgin Atlantic primarily from Gatwick, but also from Manchester”

“We are delighted at the support we have generated to make this event possible from Barbados Tourism Authority, Almond Resorts who own three big all inclusive resort hotels on the island, and Scots travel agency, Barrhead Travel, who are our official travel agents for the festival, and local distillery, Banks Brewery.”