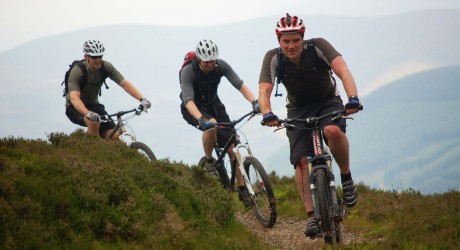 ORGANISERS of TweedLove bike week, in association with Endura, today (Tuesday 19 April 2011), unveiled an innovative and action-packed programme for 2011 that will reinforce the Tweed Valley’s reputation as the UK’s premier cycling destination.

This year’s expanded programme of both free and paid events will be staged throughout the cycle friendly Tweed Valley from Saturday 11 to Sunday 19 June 2011.

Following funding awards from EventScotland and Scottish Borders Council some major new events have been added to last year’s busy roster of popular open races, big guided rides (both on and off road), a film night (including a film-making competition), a dual slalom and barbecue and a series of informal ride-outs, where local riders host visitors on some of their favourite (and lesser known) trails.

New events for TweedLove 2011 include:

* The Glentress Seven – the event Glentress has been waiting for. This is a seven-hour open endurance mountain bike being staged at Forestry Commission Scotland’s 7stanes Glentress, on Saturday 11 June. Aimed at both the more casual trail rider and seasoned racers from all over the UK it will combine the best of the man-made and natural trails with loads of normally off-limits tracks and some specially built sections.

* The Peebles Sprint is an exciting Belgian style ‘kermesse’ town centre road race to be staged in Peebles on the evening of Tuesday 14 June. This spectacular showcase of closed circuit road racing will see 40 riders battle it out at high speeds over a number of laps of a short, fast and furious course in the town centre. There will also be an opportunity for families to enjoy a taste of this spectacular showdown by riding a lap of the course before the start.

* Crank It Up. Concert night with Scottish indie band success story Frightened Rabbit. It might be unusual for a bike festival to include a gig by one of Scotland’s bands but as organiser, Neil Dalgleish, said: “Mountain biking is one of the world’s coolest sports.” Having just signed with Atlantic Records, Frightened Rabbit, who hail from Selkirk, return to the Tweed Valley for a very special one off gig as headliners of TweedLove’s closing concert in Peebles Burgh Hall on Saturday 18 June.

* Crosslove is an evening of racing with a difference, and features a summer cyclocross race, where riders of all ages will have to cover the most laps of a short, challenging off road course. It also features Pump It Up, the unofficial Scottish Pump Track Championships. Riders of all skill levels will have the chance of racing each other over ten laps of one track and in a velodrome style pursuit on the other. Both events are being staged at St Ronan’s Primary Shool, Innerleithen, on Friday 17 June.

* Dirt Crit – Peebles Cycling Club are holding a round of their Dirt Crit cross country series at Glentress on Thursday 16 June; open to all children under 16. This is a great to watch and brilliant to ride, if you’re young enough.

The many informal ride outs and guided rides on both fat tyres and skinny wheels, hosted by passionate local riders throughout the week, encapsulate the true spirit and ethos of the festival – ‘a special week of bike riding and good times on and off the bike in the Tweed Valley’. Local Ride-Outs, Skinny Tweed and Natural Tweed, so popular in 2010, showcase some of the best on and off road riding throughout the UK whilst promoting the area as a spectacular must-visit active and adventure destination.

The 2010 TweedLove film night was a sell-out success and organisers are expecting another great event in 2011. The multi, award-winning headline film, Life Cycles, has been recognized as one of the most beautiful and original bike films ever made.

It will be screened alongside a selection of the best entries to the amateur short film competition.  Entries are now open for this year’s competition and the theme is ‘Bikes’.

Entries must be under three minutes long and must be submitted by 31 May 2011.

For full details go to: http://tweedlove.com/

TweedLove is again being organised by the local community, everyone from Scottish Borders Council and Lothian and Borders Police to local businesses, cycling clubs and organisations and biking enthusiasts. Their enthusiasm, generous support and community spirit makes TweedLove the great success it is.

Organiser Neil Dalgleish, said: ‘We’re really grateful for all the help, support and good-will that’s going into TweedLove. Loads of folk and different organisations are working together to show why the Tweed Valley is such a cool and unique place for riding bikes – it’s in the valley’s blood now and there’s a massive amount of potential for the future.

TweedLove’s going to be a whole lot of fun this year, and with this much positive input happening, I think there’s lots more to come.’

TweedLove,in association with Endura – A Week of Bike Riding and Good Times in the Tweed Valley from 11 to 19 June 2011.

TweedLove was started in 2010 by local riders Emma Guy (from The Hub in the Forest at Glentress – http://thehubintheforest.co.uk) and Neil Dalgleish (from Hillside Agency – the guys who do all the Fort William World Cup graphics among other bike design projects – http://www.hillsideagency.com/) with the aim of reinforcing the Tweed Valley’s reputation as a premier cycling destination in the UK. It was a real success with well over 1,000 cyclists taking part, from across the UK and as far afield as Spain and Sweden. Some events sold-out and others were over-subscribed.

Endura is one the UK’s leading brands of technical cycle clothing and has substantial and growing sales in over 20 countries around the world. It is also based in Livingston, just along the road from Tweedlove’s home. As a long-time supporter of inclusive and social cycle events, Endura is delighted to be headline sponsor in supporting Tweedlove and hopes to be involved for many years to come as part of its general support in promoting cycling culture in general. Tweedlove got off to a fantastic start in 2010 and we hope to help it build on that success in 2011 – http://www.endura.co.uk/

TweedLove has been awarded funding from EventScotland, the national events agency, to boost the event programme. The huge potential of the festival has also been recognised by Scottish Borders Council, who are also supporting this year’s activity as one of a number of cycling events they are backing in the area.

The Year of Active Scotland is a Scottish Government initiative being delivered by EventScotland and VisitScotland which begins on the 1st January 2011. For more information go to www.eventscotland.org/activescotland

The Tweed Valley is an area with hundreds of miles of the country’s best trails, tracks and roads. So it’s not surprising that in the valley there is an astonishingly high percentage of cycling enthusiasts, of both the mountain and road variety, to whom biking is a big part of life. Many of them have moved to the area specifically for the trails and roads available direct from their back door.  At one local primary school, 20 per cent of the pupils ride to school every day – the national average is 2%.

Locals have formed an organisation called TweedLove Trails to promote cycling in the area and invest in the trail network. Part of their vision is to see the valley developing into a year-round biking version of the ‘ski towns’ in the alps. The belief is that there’s nowhere else in the UK so well endowed with mountain bike trails and good road rides.