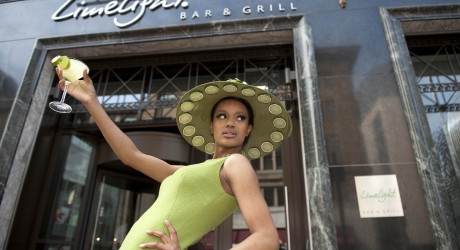 To mark the occasion, Cerise Wade made a stylish entrance in a vintage 1930s Bentley, wearing a classic shift dress and oversized hat, each decorated with both real and artificial limes.

Cerise’s fruity clothing has been specially made for the occasion by leading Scottish fashion designer, Marina Maclean.

The opening of the Hotel Indigo and Limelight restaurant brings back to life the former Scottish Power building from which, in the 19th century, the city’s first power station was run. The first building to be illuminated was Glasgow School of Art and the property also provided power to the old Glasgow tram cars.

Hotel Indigo will be run by city based Chardon Management, which is one of the UK’s leading independent hotel management companies, owned by legendary Glasgow hotelier and restaurateur, Maurice Taylor.

A franchised brand of InterContinental Hotels Group (IHG), parent company of global brands such as Crowne Plaza and InterContinental, Hotel Indigo Glasgow will be the first hotel of its type in the UK to open outside of London.

Limelight Bar and Grill is the newest culinary brainchild from Maurice Taylor, whose name until now has been synonymous with the iconic La Bonne Auberge brasserie, which, when it opened in 1975, was the trailblazer for what is now a thriving and vibrant restaurant scene in the city.

As well as serving up classic Grill dishes, Limelight has revived vintage Glasgow cocktails, including the Alice Underground Long Island Iced Tea and the Harvey’s Hurricane.

Joining these originals on the menu is the new signature Limelight cocktail… an oversized measure of which Cerise sampled today.

Commenting at the opening, Maurice Taylor said: “The heart of the city’s new financial district is the perfect location to open Hotel Indigo, which will particularly appeal to business travellers, whilst its proximity to the city’s great shopping, including the city’s famed Style Mile and vibrant theatre scene will undoubtedly attract leisure guests.”