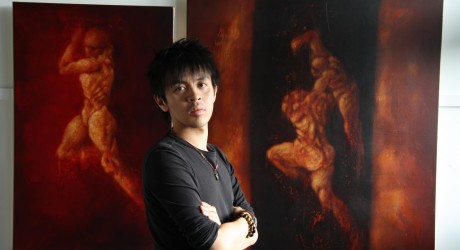 FRANK To, the young Glasgow-based artist with a growing international reputation as a leading contemporary figurative painter, has expressed his sadness at the demise of the Glasgow Art Fair and its absence from George Square this year.

Having earned a reputation as Britain’s biggest art fair outside London, the replacement of the Glasgow Art Fair by an event called The Vault, earmarked to take place at The Briggait in Merchant City in July, comes despite the Glasgow Art Fair achieving a 20 per cent rise to 20,000 visitors last year.

“The Glasgow Art Fair is a major event for the city which generates massive revenue for local businesses. Not having Glasgow Art Fair in George Square breaks the cycle of tradition: everybody knew about it and had done so for over a decade. It’s very sad, though I understand these are difficult times for everyone.”

Frank To’s ‘The Human Condition’ exhibition comprising a series of figurative paintings, predominantly oil on canvas with two self-portraits using mixed media on paper is showing at The Leith Gallery in Edinburgh until 30 April. ‘The Human Condition’ features 22 paintings ranging in size from 14cm x 14cm up to 80cm x 110cm and in price from £550 up to £5.000.