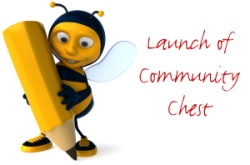 FOUR community groups in Perthshire are celebrating being the first organizations to receive Community Chest Awards, a scheme which is being run by St John’s Shopping Centre in Perth.

In the first of three funding rounds, a total of £1,775 has been awarded to four local groups to assist with a variety of needs – ranging from bowling green maintenance equipment to new team tracksuits and running vests.

The award winners, who were announced this week, are:

Voting took place mainly on St John’s Shopping Centre’s Facebook page and with over 400 votes cast, with almost 80 per cent of the votes going to the four awardees, it was clear which projects the members of the Perthshire public wanted to support.

Siobhan McConnell, St John’s Shopping Centre manager, commented: “We are absolutely delighted that we have four very interesting and diverse winners for the first round of the awards and it’s good to know that the money will make a big difference to their community groups.

“This has been a great opportunity for St John’s Shopping Centre to make a real and tangible difference to the community we live in.”

St John’s Shopping Centre announced the move to open up its coffers to worthy local community projects earlier this year.

The 2011Community Chest contains £5,000 for requests from the local community during 2011 with £3,225 now remaining for the final two funding rounds.