Media Release: Frightened Rabbit head back to their home valley 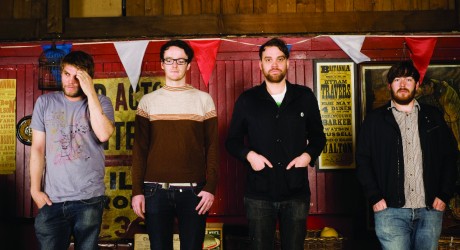 SCOTTISH indie music success story, Frightened Rabbit, are to play a one-off, special gig as part of a mountain bike and cycling festival in the Tweed Valley.

The band are originally from Selkirk and have ties with the organisers of TweedLove, a week-long festival of cycle and bike-related cultural events.

This year’s expanded programme of both free and paid events, being staged throughout the Tweed Valley from Saturday 11 to Sunday 19 June 2011, includes Crank It Up, a new closing concert for the week with headline act, Frightened Rabbit.

Having just signed with Atlantic Records, the band return to the Tweed Valley for a very special one off gig at Peebles Burgh Hall on Saturday 18 June, where they will showcase the songs that have earned the band such a passionate following.

TweedLove organiser, Neil Dalgleish, said: “It’s fantastic for us to have Frightened Rabbit at TweedLove. It might seem odd to have a gig as part of a bike festival, but mountain biking is one of the world’s coolest sports and Frightened Rabbit are one of Scotland’s coolest bands so it all makes total sense to us”.”

Any kind of rock gig at Peebles Burgh Hall is not a regular occurance, but hosting a band of this stature is downright unheard of.

Added Dalgleish: “It’s a major coup for us and we can’t thank the band enough for agreeing to play. It gives our whole festival a big boost, and the fact that they’ve agreed to put any proceeds towards next year’s festival is just brilliant.”

The idea of mixing outdoor activities and music is not new for TweedLove organiser, Dalgleish, though.

He was a driving force behind the acclaimed Outsider Festival held in Aviemore in 2007, which included trail running and a mountain bike marathon alongside appearances by KT Tunstall and Crowded House.

“I hope we can go on and build from here”, said Dalgleish. “It just seems like such a great combination to me – spend the day outdoors, come home on a high and have a great gig to go to at night. Sport and culture aren’t mutually exclusive, it’s just a case of getting the combination right.”

TweedLove is again being organised by the local community, everyone from Scottish Borders Council and Lothian and Borders Police to local businesses, cycling clubs and organisations and biking enthusiasts.

Their enthusiasm, generous support and community spirit makes TweedLove the great success it is.

TweedLove, in association with Endura – A Week of Bike Riding and Good Times in the Tweed Valley from 11 to 19 June 2011.

TweedLove was started in 2010 by local riders Emma Guy (from The Hub in the Forest at Glentress – http://thehubintheforest.co.uk) and Neil Dalgleish (from Hillside Agency – the guys who do all the Fort William World Cup graphics among other bike design projects – http://www.hillsideagency.com/) with the aim of reinforcing the Tweed Valley’s reputation as the premier cycling destination in the UK.

It was a real success with well over 1,000 cyclists taking part, from across the UK and as far afield as Spain and Sweden. Some events sold-out and others were over-subscribed.

The Tweed Valley is an area with hundreds of miles of the country’s best trails, tracks and roads.

So it’s not surprising that in the valley there is an astonishingly high percentage of cycling enthusiasts, of both the mountain and road variety, to whom biking is a big part of life. Many of them have moved to the area specifically for the trails and roads available direct from their back door.

At one local primary school, 20 per cent of the pupils ride to school every day – the national average is two per cent.