Media Release: On a bicycle made for two – couple to get hitched at start of cycling event 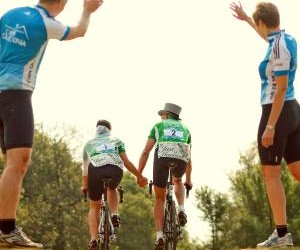 THE imminent Royal wedding has firmly gripped the nation, but for two cycling enthusiasts, Rick Millin (48) and Jo Louden (33) from Guildford, Surrey, 1,900 guests pale into insignificance as they prepare to tie the knot at 6am on Sunday 15th May in front of 5,000 participants at this year’s IMG Challenger World event Macmillan Cancer Support Etape Caledonia, in Pitlochry.

The couple, who are raising money for Macmillan Cancer Support, got engaged on their way to Etape Caledonia in 2010 and, after briefly considering a wedding venue in the Bahamas, plumped for a 6am start to their married life at the UK’s biggest closed road cycling event instead.

Jo commented “We both wanted a fairly low-key wedding and we’re ultra competitive when it comes to cycling so, taking into account we got engaged on the way up to Etape Caledonia last year, we thought: why not?! The only thing now is that I have had just under four weeks to organise the whole thing!”

Rick, who is a carpenter by day and a spin instructor by night, said: “Macmillan Cancer Support is a charity very close to our hearts, as both my parents were affected by cancer and we feel it is important to support the charity that did so much for them, on our special day.”

Around 5,000 cyclists will join the couple in celebrating their wedding as they ride away into the Scottish sunrise together sporting the event numbers, one and two. Joining them will be Olympic athletes, TV presenters and some of the country’s top amateur cyclists.

Despite the high level of competition, both Rick and Jo are determined to make their day a double celebration and their track record speaks for itself.

Rick’s best time in Etape Caledonia is 3hrs 46mins, just a ten-minute gap between him and the best time set by Veli-Matti Raikonnen from Aberdeen who has come in with the top time three years on the trot.

Etape Caledonia, now in its fifth year, has grown in popularity every year since its inception from just over 1,000 participants in 2007, to over 5,000 in 2011. Rick and Jo will be the first couple ever to be married at the event.

Amy Whiteley, event director, said: “IMG Challenger World is very excited about being part of Rick & Jo’s special day and we are delighted that they asked to tie the knot at Etape Caledonia. We wish them the very best for their forthcoming nuptials, and also hope they both get the times they are aiming for in the event.”

More information about the event can be found online at www.etapecaledonia.co.uk or if you wish to donate to Rick & Jo’s fundraising efforts visit http://www.justgiving.com/millin.