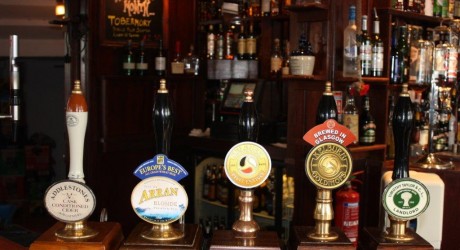 LOVERS of real ale will be delighted to learn that the award-winning 1901 Bar & Grill in Shawlands on Glasgow’s southside has been awarded a Cask Marque.

Says a spokesperson: “As an independently-inspected award, guaranteeing the quality and care of cask or ‘real’ ales, the Cask Marque is a sign appearing outside pubs which guarantees that, inside, drinkers can get a great pint of cask ale.”

Christopher Queen, general manager at 1901, said: “We’re delighted to receive this mark of approval which sends a clear sign to anyone seeking a pint of cask ale in the southside to head back to 1901.

“Unlike most beer, which is filtered and often pasteurised in the brewery at the end of the brewing process, cask beer is a living product and gains maturity and flavour in the cellar and beer lovers can find a cask-conditioned ale to their taste at 1901.”

In addition to offering a selection of cask ales, premium lagers, malts and wines, the long-established 1901 at 1534 Pollokshaws Road, offers a menu comprised entirely of freshly-prepared meals, with a focus on fresh cuts of prime 28 day Aberdeen Angus beef.

1901 won the best individual bar/pub award in the Best Employers in Hospitality 2010.