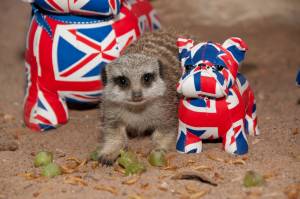 AS crowds begin to gather in Pall Mall for a chance to see the Royal Bride, the alternative ‘Royal’ family in St Andrews has been busy kitting out their den with some of the latest Royal wedding paraphernalia to hit the shops.

Kate & Wills, the meerkats at St Andrews Aquarium, were seen yesterday familiarising themselves with a trio of British bulldogs and sausage dogs, resplendent in the Union Jack colours, to get themselves fully into the spirit of the forthcoming Royal nuptials.

St Andrews Aquarium is widely rumoured to be the location where Prince William and Catherine Middleton first kissed, at a function organised by the University of St Andrews Water Polo club which was held at the Aquarium.

The romantic surroundings of the Aquarium have not only worked their magic on the Royal couple who marry this Friday, but have also cast its spell on Kate & Wills, the meerkats, who have pipped their famous namesakes to the post of producing an heir when Kate unexpectedly gave birth to a cuddly baby boy meerkat on 2nd March.

Bosses are currently inviting suggestions from the public for his name on the Aquarium’s facebook page: www.facebook.com/fifeaquarium.

“We wish them both the very best on their big day and they can be rest assured, Kate & Wills shall be watching them take their vows along with all the other visitors to the Aquarium.”