Media Release: Once is not enough for 2010 Scottish Six Days winner 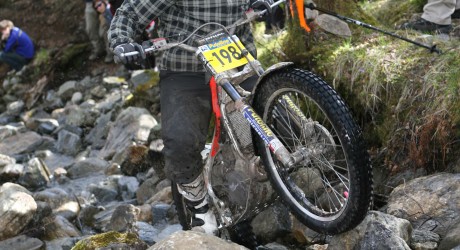 THE Scottish Six Days Trial (SSDT) brings a flood of emotions to every rider involved – you only have to look at the tortured faces of the finishers on the final day to see how much the iconic event means to them.

For last year’s winner, Alexz Wigg, the centenary SSDT that will take place in and around Fort William from Monday 2nd to Saturday 7th May, marks a particularly special occasion as he once again attempts to recreate his magical win from 2010.

“It is hard to put in to words how much the SSDT means to me if I’m honest – in my mind it’s the single most important event of the year and certainly my favourite.

“Winning last year was a dream come true. Lots has changed since then with many of the top riders changing manufacturers, including myself,” explained the current trophy holder.

2011 sees Alexz move under the Sherco awning and he will take advantage of having multi SSDT winner, Malcolm Rathmell, as his manager come mentor this time around.

As the 2011 edition of the SSDT marks the centenary of the event, each rider will feel increased pressure to produce a memorable performance, but with Alexz he also has the added weight of looking to repeat last year’s victory bearing on his young shoulders.

“I definitely feel under pressure to perform well at this years event with it being the 100th anniversary and as I won last year.

“I’m obviously aware people will be expecting a lot from me, but I’m confident I can fight for the win. No one puts more pressure on me than myself and I know what I’m capable of when I put my mind to it.

“When it comes to the SSDT there are a handful of riders in the UK who are capable of taking the win and we’ve all changed manufacturers this year so I guess we’re on a pretty even playing field,” said 21 year-old Alexz.

With the first three rounds of the domestic championship out of the way Alexz has spent the last few weeks training towards the SSDT, making sure his fitness and endurance are 100 per cent before the event.

“The SSDT is only a few days away now and we are making our final checks to the machine. I’ve spent plenty of time on my Sherco over the last few weeks and I’m feeling good.

“My fitness is at an all time high and I’ve not felt so comfortable on a bike for a long time. Getting a good first day at the SSDT is critical as one small mistake can ruin your chances for the rest of the week.

“Providing I have a little luck, I know I’m in a really strong position to fight for the win and I can’t wait to get going – I love this event,” concluded Alexz.

The Edinburgh and District Motor Club will once again be at the helm of this fantastic competition and will be responsible for upholding an event where club riders and the World’s best compete together over the same course that will include 30 boulder-strewn sections on each of the six days.