Media Release: One hundred years and waiting for the start of the Scottish Six Days Trial 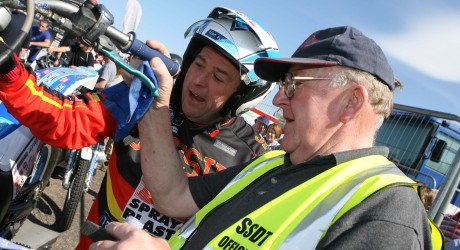 ATTENTION has shifted to the loch-side town of Fort William, which will be the base for the famous Scottish Six Days Trial (SSDT) that will celebrate its centenary when the actual competition gets underway early tomorrow morning.

For 100 years, motorcyclists have made the pilgrimage to the Highlands to take part in what remains a unique event and one that still duly tests man and machine to the limit.

Glorious sunshine created the fitting backdrop for the competitors to make their last minute preparations in order to be ready to be part of this historic occasion.

The Parc Ferme located in the West End car park was a hive of activity with riders and spectators mingling in a festive type atmosphere, as the formalities of the bike inspection and marking saw the lucky 276 competitors finally make it to the start line after months of preparation.

Whilst much has changed over the last century, the fundamental idea and ethos of the SSDT remains very much intact, with the riders only permitted to change certain parts of their bike during the gruelling six day adventure and are still forced to maintain and repair their machines without any outside assistance.

It is this lure of bike and rider being pitted against the elements that continues to attract competitors from all over the world, this year’s entry includes representatives from as far a field as Australia and Canada, and many others from across Europe.

The SSDT remains the single most important event in the trials calendar, and offers amateur riders the unique opportunity to compete over the same course and alongside their professional counterparts.

This is perfectly illustrated as the clubman ranks prepare to share their week with 12 times FIM Trial world champion, Dougie Lampkin – Gas Gas, who has been a winner of the SSDT on no less than five previous occasions and will look to secure a record-breaking sixth victory this year.

Dougie confirmed his liking for the SSDT.

“I first came to Fort William when I was just six weeks old and have been coming back pretty much ever since. I have come here to win, but also to ride with my family and friends as it is the only time that we can ride together.

“I really enjoy this week and hopefully after last year when my bike broke down, I will have more luck on my side.

“To win a sixth Scottish would be incredible especially with it being the centenary.”

Although the competitive action does not get underway until tomorrow morning, with the first rider leaving the Parc Ferme at 7.30am, today saw the start of the festivities as the now usual parade of riders through the town centre was led by a series of previous SSDT winners.

2011 promises to be a special year in the SSDT’s long and illustrious history, as not only is it 100 years since the trial was conceived in its current format, but also the competition to win has never been fiercer.

With hot favourites such as James Dabill – Beta, Michael Brown – Gas Gas, Dougie Lampkin – Gas Gas, Graham Jarvis – Montesa and Alexz Wigg – Sherco all mounted on new machinery this season, the battle to take top honours in this important year looks set to live up to the occasion.

SSDT Image Service
High Resolution Images and results from each day of the event can be found on our ftp server – details as listed below – these will be uploaded on a daily basis.