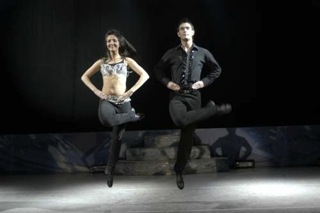 THREE outstanding Irish dancers – currently based in Glasgow, who have just finished touring internationally with the renowned Irish Dance show, Riverdance, created by Michael Flatley – will take part in the Celtic Festival Barbados 2011.

Their first appearance is an Irish Night at the Irish pub McBrides in St Lawrence Gap, where they will dance to the music of Irish singer, Black Jack Davey.

Says a spokeperson: “Ireland has as strong a connection with Barbados as Scotland and Wales. It’s a long history going back more than 300 years, to the times of white indentured slaves being sent to the island. Their descendants today live in the Scotland district of Barbados, in St Andrews Parish and are some of the poorest people on the island.

“The lead Irish dancer, Jordan Osborne has just set up her own school of Irish dancing in Glasgow.

“She is a British National, All Ireland, All Scotland and world champion Irish Dancer and has danced with Michael Flatley. World medallists, Gavin Boyle, and Jordan’s sister, Joceyln, will also take part in the festival.”

Martyn has attended the festival every year marching through the streets and playing at Scottish weddings.

He will take part in a unique ‘stereo’ piping display on Broad Street Bridgetown, where the lines of Amazing Grace will be played from one end of the street to the other on the opening day of the festival.

Adds the spokesperson: “Thousands of visitors from each of Scotland, Ireland and Wales, make their Barbados their holiday destination every year, and this is the most ‘revisited’ island in the Caribbean with a repeat visitor statistic of 43 per cent.”

Says co-organiser of the festival, Carol Anderson of The Business, a public relations consultant from Edinburgh: “Barbados is easily accessible. In May there be more than 20 scheduled flights a week, with British Airways and Virgin Atlantic primarily from Gatwick, but also from Manchester.

“We are delighted at the support which makes this event possible from Barbados Tourism Authority, Almond Resorts who own three big all inclusive resort hotels on the island, and Scots travel agency, Barrhead Travel, who are our official travel agents for the festival.

“The local brewery, BANKS, is sponsoring our highland games event, and we have support from many more local tourist businesses.”