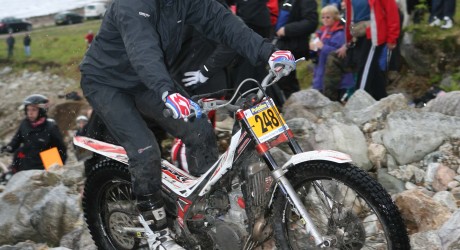 OVERNIGHT leader, James Dabill – Beta, held his nerve brilliantly to secure the win during a tense and close finish to the centenary edition of the Scottish Six Days Trial (SSDT).

Riding at the front of the field, Dabill lost marks as early as the second group at Upper Mamore to see his advantage reduced to just two marks and then saw things come far too close for comfort as he dropped a further dab at Leanachan.

Holding just a one mark lead going into Ben Nevis, Dabill showed great composure by cleaning all six sections in what looked like a certain winning performance until he parted with another dab at Nevis Forest to leave him tied on the same marks overall as Alexz Wigg – Sherco.

Further down the running order, Wigg was more than aware of what Dabill was doing ahead of him and was showing the same steely determination that had netted him the win last year.

Twelve months ago, Alexz went clean on the final day to secure the victory, and – as he exited Ben Nevis still unpenalised this time around – it looked like history was about to repeat itself.

Hasty calculations, with Wigg just three section from home, revealed that he and Dabill were now tied on the same marks, but Alexz would be declared the winner due having the most cleans throughout the week.

Dabill’s wait back in the parc ferme was a long and agonising one, but the cheers within the Beta camp were both loud and immediate as news came through that Wigg had lost a dab in the very same section as James at Nevis Forest, thus confirming the 25 year-old from Leeds as the 2011 SSDT victor.

Alexz’s day was about to go from bad to worse when his chain came off in the very last section of the trial at Town Hall Brae. His total of six marks on the day and 19 overall cruelly demoted him to fourth in the final standings.

Graham Jarvis – Montesa actually tied on the same points as Wigg, as he too had his own disaster when he fived the top section at Ben Nevis within inches of the ends cards.

These were the only marks the ex winner lost on day six, and this was sufficient for him to claim the last podium place as he returned to SSDT after a two-year absence.

In the female class, the winner was far more clean cut with Emma Bristow – Ossa, leading from the first day until the last and in the end beating her main rival Rebekah Cook – Sherco by a comfortable margin.

2002 SSDT victor, Amos Bilbao – Montesa, made a winning return to the event after being absent in more recent times when he took the top spot in the Over 40 category after a week long battle with John Shirt – Gas Gas.

All in all the one hundredth running of the Scottish Six Days Trial was a real success with exceptionally hot weather at the start of the week followed by a most dramatic conclusion.

However, a century on, the entrants remain the most important part of this great competition, with the 276 riders from around the globe who started on Monday each playing their part in creating this incredible moment in the history of what remains the most famous trial on the planet.

Marking its centenary, the 2011 Scottish Six Days Trial will take place throughout Lochaber, The Outdoor Capital of the UK,  in the north west Highlands between Monday 2nd and Saturday 7th May – for more details please visit www.ssdt.org.

High-resolution images and results from each day of the event can be found on our ftp server – details as listed below – these will be uploaded on a daily basis.

The event actually originated as a five-day reliability trial back in July 1909, before being extended to a six-day competition a year later. However, the start of the Scottish Six Days Trial (SSDT) proper as organised by the then newly-formed Edinburgh and District Motor Club began in 1911.