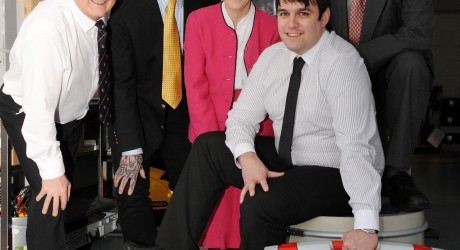 ABERDEENSHIRE company, ThinJack, has just announced that turnover has once again grown during the past year.

ThinJack is headed by Guy Bromby and Alastair MacDonald and is based at Arnhall Business Park, Westhill where the company has a base staff of five people for operations in the North Sea and Europe.

ThinJack services international projects from additional bases in Melbourne in Australia; Al Khobar in Saudi Arabia; Houston, Texas and Luling, Louisiana, in the US Gulf of Mexico.

The business, which began operations in 2007, has created an international track record for its revolutionary ThinJack, a steel envelope which can be inflated with up to 2,500 bar of hydraulic pressure to exert hundreds of tonnes of force, making it an ideal separating and jacking solution in hazardous, difficult or restricted areas.

The bespoke service is primarily used for the rigless separation of seized well flanges and is also used to remove concrete weight coat from pipelines.

Key achievements in the last 12 months include the completion of the company’s first contract in Angola, a sharp increase in work in the Netherlands and the launch of the flange separation consultancy service.

Guy Bromby said: “Many companies across the industry took a dip when the oil price fell but, like others, we have recovered from that and find ourselves in a fit position to face the future as more customers learn that ThinJack is a safer and faster way of reducing well workover costs.

“We forecast that turnover will significantly increase during the current financial year, fuelled by the prospect of new and repeat work in many parts of the world and internal management changes which will help take the company to the next level.”