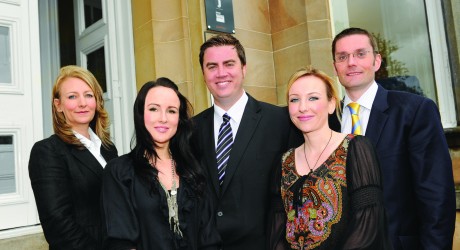 A NEW creative hub has opened in Paisley in a bid to support businesses and organisations across Renfrewshire.

The three firms have relocated to a new shared office in Paisley’s Renfrew Road.

New Horizon Media is a media and communications agency set up by Donald Morrison, an award-winning PR consultant.

The firm offers a range of services, including public relations, copywriting, media training and crisis communications.

A former communications manager for Paisley and Renfrewshire South MP, Douglas Alexander, he also worked at Glasgow Airport for more than five years, latterly as head of media for parent company BAA Scotland.

He led the airport’s PR response to the 2007 terrorist attack and more recently provided expert advice to Glasgow Airport in 2010 when a cloud of volcanic ash grounded aircraft across the UK and Europe.

Donald said: “I’ve worked in Renfrewshire for most of my adult life, so it feels right to open a new office in Paisley. We have some fantastic businesses in Renfrewshire and a real entrepreneurial spirit. I’m looking forward to giving a voice to those businesses.”

Ashley Moore, account director, joined the business as partner two years ago and the growing team have built up an impressive client base across a range of business sectors, including education, property, leisure, tourism, and retail.

Ashley said: “We’ve been looking for a new base from which to grow the business and we chose Paisley because of the fantastic range of businesses it has to offer, and because of its excellent transport links. We’ve had great support from Renfrewshire Council and we’re excited about the future. We’re confident we made the right decision in choosing Paisley.”

Joule is a business development consultancy specialising in sales and marketing for small and medium sized businesses. The company works across a diverse range of sectors including education, property, construction and retail.

Director, Tara Fitzpatrick, has enjoyed a successful career with over 20 years experience, having worked at sales and marketing director level in several national companies.

Tara said: “We are absolutely delighted to be moving the Joule operation to Paisley and expanding our businesses here. Being part of a new, innovative creative hub is very exciting and we look forward to being a part of the Renfrewshire business community.”

Bob Davidson, chief executive of Renfrewshire Chamber of Commerce, said: “The fact that these businesses chose to locate in Paisley is a fantastic vote of confidence in Renfrewshire. The opening of a new creative hub in the heart of Renfrewshire is good news for the business community, in particular, and we look forward to working with the three agencies in the coming months.”

MEDIA RELEASE posted by New Horizon Media. You too can post media releases (aka press releases) on allmediascotland.com. For more information, email here.