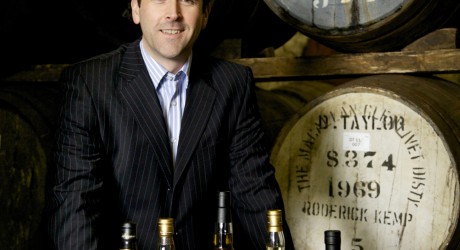 The Huntly-based company has appointed Scott Watson to the post of CEO, taking over from Euan Shand who is now company chair.

Scott Watson started in the industry with United Distillers which later became Diageo.

Prior to joining Duncan Taylor he held International director roles with Brown-Forman and was latterly general manager, Central Europe for luxury goods company LVMH, owners of Glenmorangie and Ardbeg Distilleries.

Scott has brought with him a wealth of International experience in brand building and market development, having lived overseas for ten years.

The company bottles its single malt and blends at its headquarters in Huntly, employing 23 full-time staff.

“The whisky is bottled and labelled, with the entire process from cask to cap being hand crafted,” explained Scott.

“We really nurture our whisky and don’t add caramel and we don’t chill filter our whisky, the whisky is bottled as nature intended; we offer unique products from single cask through to volume blends.”

One of the company’s main brands, ‘Black Bull’, can be traced back to the 1930s when it was one of the most popular whiskies in the United States on repeal of prohibition.

Scott says: “People are increasingly knowledgeable around the world, and seeking their own unique experience.

“At Duncan Taylor Scotch Whisky Limited, we want the character of the distilleries of Scotland and individual casks to shine through – we give consumers all over the world something very distinctive from this part of the world.

“I believe our company is well placed to deliver the increasing demand for bespoke and luxury whisky.”

He said: “Scott has been brought on board to take this company to the next stage in its development, taking turnover to £10m within the next five years.

“We are uniquely positioned to do this by having a tremendous stock and brand profile and with Scott’s experience in management and international brand building we are confident of successfully reaching our goal.”