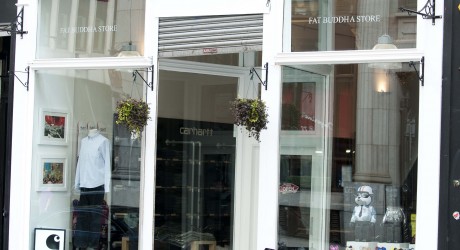 With previously unseen photos and essays collected during the making of the film, the book recalls the era and artistic legacy of Norman Collins, the father of old-school tattooing.

Says a spokesperson: “His visionary style inspired an entire generation of tattoo artists and his influence is still recognised today.”

More than twice the size of the original and thriving Fat Buddha at Bath Street, the new outlet, providing some 2,250 sq ft of retail space over three floors, signals a repositioning of the retailer’s offering with a renewed focus on quality fashion brands, an extensive magazine rack and a basement stacked full of art supplies.

Fat Buddha founder, Leslie Docherty, said: “We’re delighted to have secured such prime city centre space which enables us to realise the ambitions we’ve harboured for Fat Buddha’s expansion in Glasgow for some time.

“Fat Buddha was founded with the aim of bringing together all the various strands of urban street culture in the one place, but our Bath Street shop has been bursting at the seams of late, so we’ve been on the hunt for the right second location for the last year.

“We’ve now found the perfect location to take Fat Buddha to the next level at St Vincent Street.”

The opening of a second outlet has presented Docherty with an opportunity to rationalise and reposition his stores.

To that end, the original Bath Street Fat Buddha will focus on its extensive range of quirky and unusual gift items – including everything from Mr Men key rings to Sesame Street greetings cards – whilst the new Fat Buddha will showcase such leading fashion brands as Edwin, Undefeated, Carhartt, The Hundreds, Obey, Huf, Nike and Vans.

Said Docherty: “Our new shop marks a fresh start with a brand new identity – a new logo and a cool new interior with hanging plants outside – to communicate the next stage in Fat Buddha’s evolution from a small street wear specialist into a bigger and bolder city centre fashion retailer offering a unique stock range.

“In addition to top of the range fashion brands, we’ll be stocking an extensive range of specialist magazines – the kind of magazines that Borders used to stock but are no longer available in Glasgow – as well as art, design, illustration, graphic, graffiti, photography and fashion books.

“The idea is that we can give our customers everything they’re looking for from the one outlet, so that they can come in to buy paint supplies and leave with a magazine, a t-shirt, some new footwear, jeans and a cool new hat.”

Fat Buddha opened its doors on Glasgow’s Bath Street at the end of 2006 when Docherty recognised that Glasgow lacked a store that sold all the basic ingredients of street culture.

Norman ‘Sailor Jerry’ Collins’ shop was a point of call for many sailors, miles from home and ready for war, fuelled by devil-may-care attitudes and a lust for life. These men went on shore leave with a single purpose in mind: to get ‘Stewed, Screwed, and Tattooed’ – taking in their first taste of liberty.