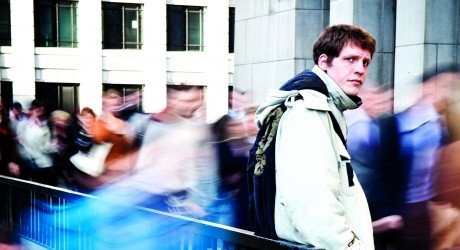 ICON Theatre, a Kent-based, national touring company producing physical and visual theatre, come to the Edinburgh Festival Fringe (2011) for the first time to premiere their brand new production, RELEASE, at the Pleasance Dome (Kingdome) from Wednesday 03 to Monday 29 August 2011.

RELEASE fuses high-energy physical theatre, an original score and mixed media to create an explosive yet moving insight into just how hard it is to go straight.

Story: Six weeks after release, three ex-prisoners struggle on the outside as they attempt to reconnect with the people and the remnants of life they left behind. Kyle searches for work but finds offers from old friends more and more tempting; Hitesh cuts himself off from friends and family and dreams of the open road; while Becky has lied about her past and lives in constant fear of being found out.

Says a spokesperson: “In this fast-paced and grittily contemporary production, the spoken word highlights the everyday problems facing ex-offenders in Britain’s 21st century society, while fluid and heightened movement delves beneath the surface to the deeper psychological scars that cause continuously negative patterns of behaviour.”

For RELEASE, Icon Theatre has pulled together a top quality creative team.

Steve Kirkham collaborated as movement director during the development process (choreographer of Klub and Zero for Frantic Assembly, The Hanging Man for Improbable; and a long-term collaborator with both Matthew Bourne and The Cholmondeleys and The Featherstonehaughs.)

The production has been created by the company through a two-year process of research and interviews with ex-offenders, prisoners, probation officers, criminologists and hostel managers, as well as site visits to hostels, prisons and probation offices.

The project has had development support from the South Hill Park Arts Centre, the Pleasance Theatre, the Brook Theatre, the Toynbee Studios, an R&D award from Arts Council England South East and a work-in-progress showing at the Young Vic.

For more information on Release presented by Icon Theatre go to – http://www.icontheatre.org.uk or  http://www.releaseinfo.org

For previous Icon shows: “Fantastic…. A fun evening out” The Evening Standard, “Inventive, funny and interesting” Time Out  and “A theatrical treat” The Stage.

Icon Theatre is a Kent-based, national touring company producing innovative physical and visual theatre. Working with diverse collaborators from different backgrounds, each of our shows generates a unique combination of theatrical techniques, blurring the boundaries between movement, text, film, dance, music and puppetry.

Formed in 2002, we have been touring rural and small scale venues for the last eight years, and as a result we like to think of ourselves as a well kept Kentish secret!

Release is our first production to go to the Edinburgh Festival.

Icon Theatre are a permanent resident company at the Brook Theatre, Chatham.