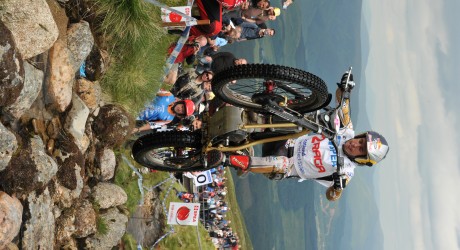 With two rounds of the eight leg tour behind him, Raga finds himself at the sharp end of the standings, only seven points behind leading man Toni Bou – Repsol Montesa.

Last year’s event in the Scottish Highlands was declared an overwhelming success by spectators and riders alike, despite this Raga failed to reach the podium on either of the two days – finishing fourth on both occasions.

Struggling to find his form on the slippery Scottish boulders the four-times indoor champion never really got to grips with the traditional style hazards last year – something which he is determined to correct this July.

Tired of riding in the shadow of countryman Bou, Raga is keen to make each round of the series count and is looking to make Scotland his own.

He said: “For sure, it is very important for me to get a good result in Scotland, not only because of the championship, but also I want to prove my ability to people – especially after my results there last year.

“Scotland was not good for me in 2010; however, I have come a long way as a rider since then and I am confident I can produce a much better result.

“Nevis Range is unlike any other round of the championship.

“The sections are amazing and have a little bit of everything. The Highland views are second to none, it is really a beautiful setting for the trial. This year, the event is in July rather than June so hopefully the weather will be nicer as well, which will help me.”

The Scottish Highlands are not unfamiliar to Raga who, as well as riding last year’s World championship event, has previously ridden the famous Scottish Six Days Trial, although over ten years ago.

Add this to a handful of British championship events, which he rode during his early years in international competition, and Adam has a greater idea of what to expect from Scotland than many of the other riders.

“I rode the Scottish Six Days Trial, but it was a long time ago and I am not sure if it will give me an advantage. I think the biggest difference compared to last year is myself.

“My riding is much better and Dougie Lampkin has been assisting me with my training, which has been a great help. This year we also have longer in the sections, which I think will help my riding – the zones in Scotland are technical and require maximum concentration so the extra time will be good.

“The weather in Scotland is very important and can make a big difference to the results, though whatever happens I am very excited to return to Fort William,” continued the Gas Gas factory rider.

The inaugural SPEA FIM Trial World Championship held at Nevis Range in 2010 was a huge success with the spectacular setting creating one of the best events the championship had seen in its 35-year history.

The natural sections plotted by Martin Lampkin, from organisers, L + M Events, provided an unique challenge for the competitors and brought out some superb riding that was warmly appreciated by the assembled crowd who enjoyed the atmosphere of this incredible location.

The UK’s only mountain gondola allowed the fans easy access to all parts of the course and provided them with unrivalled views of Lochaber and the Scottish Highlands.

Fort William, in the Scottish Highlands, hosts the sixth round of the world’s most important and best motorcycle trial competition

The Nevis Range, Fort William, Lochaber – the Outdoor Capital of the UK
Saturday 30 and Sunday 31 July 2011

WHAT: The UK leg of the 2011 SPEA FIM Trial World Championship, the 36th edition of the biggest, the most important and the best motorcycle trial competition series on the international calendar.

As a major focus for both country and rider 60 of the most accomplished, composed and skilful motorcycle trials riders from 15 countries around the globe will descend on the Scottish Highlands to battle it out for valuable points towards the 2011 SPEA FIM Trial World Championship World Pro (male only at Fort William), World Junior (male and female) and World Youth (male and female) titles.

THE SPORT:  Motorcycle trials is unique in the world of motorsport. It is the only discipline where the winner is decided on skill alone. It is a test of riding skill and balance over observed sections.

When competitors ride the timed sections their feet must remain on the footrests of the motorcycle as they negotiate seemingly impossible obstacles, both natural and man made.

They must negotiate steep gullies, slippery rock steps, rocky streams or boulder-strewn gorges. Sections vary in length and severity, and riders are penalised if they put their feet down to help them ride the section, and more so if they fail to negotiate the section in its entirety.

The sport originated in the UK nearly a century ago and has enjoyed a long association with Fort William and Lochaber – ‘The Outdoor Capital of the UK’ – as host to the World famous Scottish Six Days Trial that celebrated its centenary in May 2011.

UK AND INTERNATIONAL RIDERS: Dougie Lampkin (2010 world number seven), who has dominated the modern era of the sport with 12 World Championship titles to his name, will be leading the UK charge.

He will be joined by other GB Elite riders, James Dabill and Michael Brown.

They will be keen to put in an impressive performance in front of a home crowd, looking for that all important win on home soil.

Top international riders hoping to take pride of place on top of the Fort William podium include the in form Toni Bou (current and four times World Champion) and Adam Raga (2010 world number two), both from Spain; together with Takahisa Fujinami  (2010 world number three) from Japan affectionately known as Fujigas by his fans.

SPECTATORS: Up to 8,000 spectators are expected to attend this spectacular display of trials in July. The main competition day will be Sunday with Saturday’s timetable offering a mixture of unique and exclusive activities including autograph and meet and greet sessions with the world’s top riders, official practice and mind-blowing displays by Scottish street trials sensation, Danny MacAskill. Saturday will also be a great day to plan the best viewing points ready for the exciting competition on Sunday.

GOVERNING BODIES: The 2010 and 2011 SPEA FIM Trial World Championship and Trial Des Nations 2012 will be run on behalf of the Federation Internationale de Motocyclisme (FIM) which is the World governing body of motorcycle sport.  The Auto Cycle Union (ACU), the British motorcycle federation, has sanctioned these events to be run within its territory. The events will be run in accordance with the FIM sporting code, trial regulations, technical rules and environmental code, with delegates from both the FIM and the ACU present throughout the events to ensure compliancy.

EVENTSCOTLAND: EventScotland is the national events agency. EventScotland is working to make Scotland one of the world’s leading event destinations. By developing an exciting portfolio of sporting and cultural events EventScotland is helping to raise Scotland’s international profile and boost the economy by attracting more visitors. For further information about EventScotland, its funding programmes and latest event news visit www.EventScotland.org