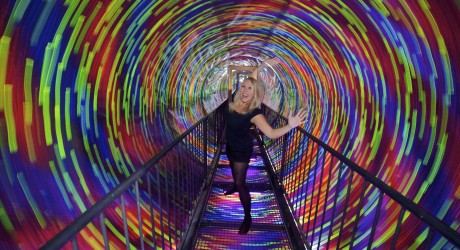 Since opening the doors to its £1.2m expansion less than a year ago, the team has enjoyed countless reasons to crack open the champers from record-breaking visitor numbers including the busiest month in its 175-year history and a 45 per cent revenue increase, to being named ‘best family attraction in Britain’ by The Telegraph and rating as TripAdvisor’s top Edinburgh attraction.

In July last year, Camera Obscura and World of Illusions unveiled its ambitious renovation, which featured two new floors, a spectacular glass walkway and a host of brand new immersive exhibits, including a number of firsts for Scotland and the UK.

By the end of 2010, the attraction had achieved its busiest ever month in history with over 24,500 visitors through the door. It also smashed its all-time record of daily admissions with 1,200 visitors – 60 per cent above the expected average.

Since the launch, almost every month has been a record-breaker with visitor numbers up as much as 62 per cent.

The success story looks set to continue throughout 2011 with visitor numbers already up by 32 per cent on the previous year, and revenue up a massive 45 per cent.

The newly-styled attraction is not only proving a hit with visitors, but is also causing quite a stir in showbiz circles.

Camera Obscura has recently played host to celebrity guests, including Hollyoaks actors, Carley Stenson and Ricky Whittle, and has even managed to inspire legendary illusionist, Derren Brown, to pay a visit on more than one occasion.

It’s also ranking up its own celebrity status with numerous television appearances, including A Question of Sport, Antiques Roadtrip and a special slot with Gabby Logan in the 2011 Six Nations Rugby.

Andrew Johnson, director and manager of Camera Obscura and World of Illusions, comments: “We were very excited about the renovation when it first launched and we knew it would be well received, but nothing on this scale – the past 11 months have been truly overwhelming.

“The recent VisitScotland accolade really is the cherry on the cake of a fantastic year.

“It’s a real testament to the attraction, its staff and the quality of experience we continually strive to deliver, and we’re delighted to be recognised alongside some of the biggest players in Scotland’s tourism industry.

“We have big plans for the rest of the year, including new exhibits, new branding, longer opening hours into the summer evenings and a calendar of exciting new events, so watch this space.”

Camera Obscura and World of Illusions is located on Edinburgh’s Royal Mile, next to the Castle, and is open seven days a week from 9.30am until 6pm, 7pm on Saturday and Sunday.