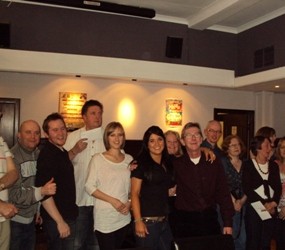 Finally, last week, 1901 dished out £1,000 in prize money to the top three winning teams after a fiercely-fought contest in the jam-packed bar.

Patrick Stapleton, general manager at 1901, said: “It was a great night, and one of our busiest for some time, as regulars and new-comers alike came to test their general knowledge against each other for the grand prize.

“The ultimate winning team walked away with £500 to their credit, whilst the runners-up won £350 and the third place team won £150. Congratulations to all winners and for those competitors who missed out this time, there’s always next week!”

After the quiz, winners and losers alike enjoyed 1901’s selection of premium lagers, cask ales, malts and wines. Recently awarded a prestigious Cask Marque, an accolade recognising the quality and care of cask or ‘real’ ales, last year 1901 won the best individual bar/pub award in the Best Employers in Hospitality.