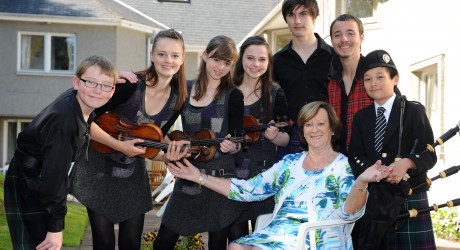 AS part of the celebrations to mark the silver jubilee of Hawkhill House nursing home, the Robert Burns World Federation NE Federation put on an afternoon of musical entertainment for residents, staff and members of the Friends of Hawkhill.

The afternoon opened with a bagpipe selection from 11 year-old Calum Brown from Culter who was Young Burnsian of the year in 2009 and 2011 out of 160,000 competitors.

One of the many highlights was the premiere of a new arrangement of the Aberdeen fishing song, The Silver Darlings, which the performers travelled to the RSAMD in Glasgow to learn.

Mrs Rona Tayler, managing director of Hawkhill, was presented with a beautiful picture by Helena Anderson Wright of the Robert Burns World Federation, who said: “We consider it a great honour and privilege to have formed an association with Hawkhill House and admire the tremendous work of its owner Mrs Rona Tayler and matron, Kristin Jackson-Brown.”