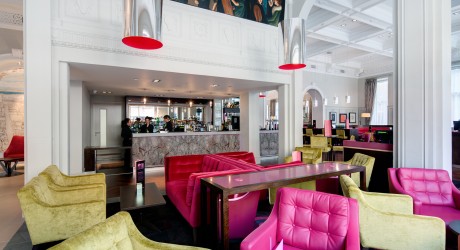 LESS than two months after opening, Limelight Bar and Grill in Glasgow’s Waterloo Street, has won with its first accolade, by being presented with the coveted Urban Design Award for Best New Bar, at the 2011 Dram Scottish Licensed Trade Awards.

Says a spokesperson: “The judges of this prestigious award were impressed with the classic yet ultra contemporary interior design of Limelight, deeming it reminiscent of the coolest – and hottest – bars and restaurants in London, in terms of originality, decor, and menu choices.”

Limelight is housed within one of the city’s most ornate Victorian buildings, which housed Glasgow’s first power station, and from which Glasgow School of Art was powered in the early 1900s.

DRAM editor, Susan Young, said: “Congratulations to Limelight on their well deserved success and it was a real testament to the success story that is the Scottish licensed trade.

“This industry is dynamic, professional and forward thinking, and the people picking up the awards, and the finalists, are a credit to the industry.”

Limelight general manager, Denis MacCann, added: “To have won such a prestigious award within just eight weeks of opening is a real coup for all the team involved, and we hope this is just the first of many!”

Limelight is the newest culinary offering from Maurice Taylor, the legendary Glasgow restaurateur, whose name until now has been synonymous with the iconic La Bonne Auberge brasserie, which, when it opened in 1975, was the trailblazer for what is now a thriving and vibrant restaurant scene in the city.

MEDIA RELEASE issued by Emjay PR. You too can post media releases (aka press releases) on allmediascotland.com. For more information, email here.