Media Release: Outstanding in its field 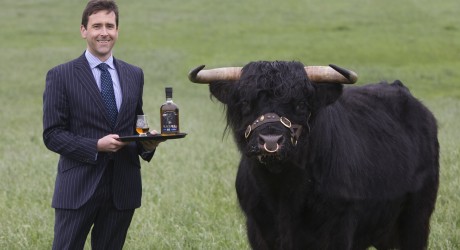 Begins a spokesperson: “Against global competition, Black Bull 12 year-old won over the judges with its powerful, yet well-balanced style. Blended at a ratio of 50 per cent malt to grain, and with a 50% abv, it’s a muscular, uncompromising drink and non chill-filtered.

“Black Bull 12 year-old, is a creamy whisky with fruity toffee notes – it’s robust and chunky on the nose with a distinctively mellow, rounded flavour.”

Duncan Taylor chief executive, Scott Watson, says: “We want the character of the selected malts and grains to be there and allow the real scotch character to shine through.”

It’s a winner all the way for Duncan Taylor Scotch Whisky and it gives this Scottish company a truly global reach.

Duncan Taylor selects whiskies from distilleries throughout Scotland, bottling a fine single malt and creating a big range of blends at its base in Huntly in Aberdeenshire.

The spokesperson added: “The Black Bull brand itself can be traced back to the early 1930’s, when it was one of America’s most popular whiskies after the repeal of prohibition. It was the first-ever 100 proof blend to be sold in the US.

“And awards are still coming in to compliment this whisky. Black Bull 40 year-old and Black Bull Special reserve have been named as the Editior’s Choice in the last two editions of ‘The Whisky Magazine’.”