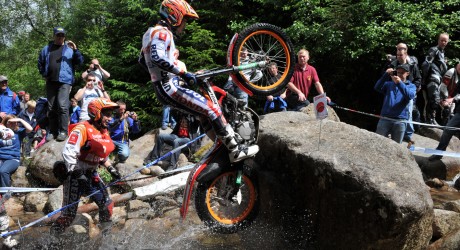 IN four weeks’ time, all roads will lead to the Scottish Highlands for 60 of the most accomplished, composed and skilful motorcycle trials riders from 15 countries around the globe.

They will be heading to the Nevis Range, Fort William in the ‘Outdoor Capital of the UK’, for the UK leg of the 2011 SPEA FIM Trial World Championship – the biggest, the most important and the best motorcycle trial competition series on the international calendar.

On 30 and 31 July, up to 8,000 spectators are expected to witness this spectacular war of attrition between the World’s best riders as Fort William hosts the sixth of seven Grand Prix events; when the 2011 World Pro, World Junior and World Youth titles could be both won and lost.

However, away from the action packed competition on Sunday 31 July organisers, L + M Events, have promised a fantastic schedule of entertainment for all the family on Saturday 30 July.

Former domestic champions and world title contenders Steve Colley and Steve Saunders have been signed up to headline. They will be pitted against each other in an unique ‘Steve vs Steve’ head-to-head competition; details of which will only be revealed on the day.

Colley will prepare for this epic duel by first staging his jaw-dropping ‘Mr Showtime’ motorcycle stunt show in the event village.

He will also treat advance ticket holders (who have gondola access passes) to a private performance of his show later in the day. This will take place at a spectacular setting beside the top gondola station, 2450ft up on the north face of Aonach Mhor.

This location also marks the start of the legendary Nevis Range downhill mountain bike track over which Dougie Lampkin (GB) and Takahisa Fujinami  (JPN), two of the planet’s most popular and recognised motorcycle trials riders, will decide the final part of their Highland Challenge that has been well documented via the much-viewed viral video at www.ukworldtrial.com.

Back in May the decorated duo fought it out over a diverse series of challenges, including quad biking, paint balling, canoeing and chess (up a mountain).

The two riders are tied, two all, going into the final mountain bike challenge so spectators can expect an adrenaline fuelled display as the riders swap engines for pedal power and ride at break neck speed down the gruelling World Cup Downhill course.

This race will determine who is crowned King of the Highlands ahead of Sunday’s official Trials GP competition.

Lampkin and Fujinami along with all the other top riders will be available for the Saturday morning autograph session when the public will have a unique opportunity to get up close and personal with the likes of current world champion and 2011 world championship leader, Toni Bou (ESP), Adam Raga (ESP), Albert Cabestany (ESP) and Britain’s very own James Dabill, to mention just a few of the stars who will be on hand.

There will also be an opportunity for a lucky few Scottish youth riders to benefit from a coaching session with Steve Saunders as he warms up for yet another scrap with his old rival.

Saturday will also see the only official practice session of the weekend, with all the riders looking to use the allotted time to get themselves and their machines dialled into the distinctive Scottish terrain.

The two-hour session is a great chance to see the riders in a relaxed mood and with the total freedom to attempt moves that they would not dare to do during the Trial proper.

With the practice area located close to the paddock, fans will only need to take a short walk to be a part of this special occasion.

Saturday’s entertainment schedule is something not to be missed, and will prove to be the perfect prelude to Sunday’s main SPEA FIM Trial World Championship competition.

The actual paddock area itself has undergone generous changes for this year with an increased event village and extra car parking spaces. Substantial investment has also seen both the creation of a state of the art café at the Nevis Range Mountain Resort with incredible views of the mountain – a facility that both teams and spectators will benefit from during the event – and a series of high ropes courses for all the family to enjoy.

Full travel and accommodation details plus the opportunity to buy discounted advance and VIP tickets for the UK leg of the 2011 SPEA FIM Trial World Championship can be found on the official event website http://www.ukworldtrial.com or by calling the event hotline 0845 643 6756.

On Saturday 30 and Sunday 31 July, the Nevis Range, Fort William, in the ‘Outdoor Capital’ of the UK, will again host the UK leg of the 2011 SPEA FIM Trial World Championship, the 36th edition of the biggest, the most important and the best motorcycle trial competition series on the international calendar.

Seven other rounds will be hosted in Germany, France, Japan, Spain, Andorra, Italy and Poland in the 2011 series.

There will be a real war of attrition between riders as Fort William hosts the penultimate round of eight Grand Prix events; the potential for titles to be both won and lost high on the agenda.

Motorcycle trials is unique in the world of motorsport.

It is the only discipline where the winner is decided on skill alone. It is a test of riding skill and balance over observed sections.

When competitors ride the timed sections their feet must remain on the footrests of the motorcycle as they negotiate seemingly impossible obstacles, both natural and man made. They must negotiate steep gullies, slippery rock steps, rocky streams or boulder-strewn gorges. Sections vary in length and severity, and riders are penalised if they put their feet down to help them ride the section, and more so if they fail to negotiate the section in its entirety.

The sport originated in the UK nearly a century ago and has enjoyed a long association with Fort William and Lochaber – The Outdoor Capital of the UK – as host to the World famous Scottish Six Days Trial that celebrates its centenary in 2011.

The UK World Trial 2011 also marks the second year of a three year plan that will see the prestigious FIM Trial des Nations being staged at Nevis Range in 2012, as this inter-countries competition visits the UK mainland for the first time since the competition started in 1984.

This annual event normally attracts teams from around 25 nations and caters for both female and male riders.

The competition takes place over three days with the final round of the FIM Women’s Trial World Championship opening proceedings ahead of the two-team events. The three member ladies teams then fight it out on Saturday prior to Sunday’s main trial, when the mighty four-man squads battle it out for top honours.

The 2010 and 2011 SPEA FIM Trial World Championship and Trial Des Nations 2012 will be run on behalf of the Federation Internationale de Motocyclisme (FIM) which is the world governing body of motorcycle sport.