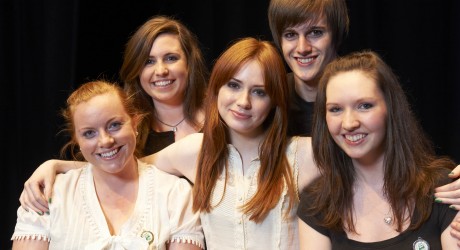 DOCTOR Who star, Karen Gillan, landed the TARDIS at Eden Court Theatre, Inverness, this weekend for a very special appointment with some stars of the future.

As an added bonus, Karen also presented the students their LAMDA Awards, signifying the culmination of the students’ efforts.

The time-travelling 23 year-old, who is Eden Court’s Arts Education Ambassador not only attended Eden Court’s Youth Dance Company, Senior Youth Theatre, and a number of other groups, but also undertook both her SQA Higher Drama, and LAMDA exams at the theatre under the watchful eye of tutor, Amanda Luscombe.

Karen was also one of the many schoolchildren across the Highlands each year whose in-school drama was taught by Eden Court’s Arts Education Team.

Invernessian, Karen, was on hand to watch and encourage the students – many of whom hope follow in her footsteps – in their performances.

She then presented the 49 young hopefuls with their awards. Eden Court’s LAMDA students have had another hugely successful year, with everyone achieving at least Merit or Distinction.

Karen Gillan said: “I am pleased and proud to be able to come back to Eden Court and help with the LAMDA awards. I did so much stuff at that theatre over the years so it was great to be back. It was very special.”

Eden Court’s association with the time travelling Doctor and his companion continued on a totally separate front this week too, as local children from Cauldeen Primary School, with help from Eden Court Arts Worker Jesse Paul, got to the last ten in BBC Learning’s Script to Screen Competition, which offered one lucky team of budding scriptwriters the chance to take a time-travelling adventure in the TARDIS with the Doctor.

Children from across the UK were invited to write a script for their own three-minute Doctor Who mini-adventure. More than 100,000 scripts were received.

Eden Court operates a year-round programme of Arts Education throughout the Highlands of Scotland, and runs more than 60 classes each week within the recently redeveloped theatre building.