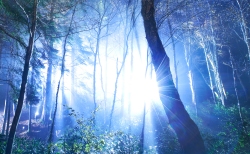 THE Enchanted Forest, one of Scotland’s premier sound and light shows, has been shortlisted for two titles in this year’s prestigious Scottish Event Awards, which will see it battling out for its place at the top against some of Scotland’s most well known events.

The Enchanted Forest, which is organised by Highland Perthshire Community Interest Country under the Perthshire Big Tree Country brand, was founded in 2002 with just 3,000 visitors attending in its first year.

In 2010, that figure rose to over 20,000 visitors attending the annual event which has become a mainstay of Scotland’s tourism calendar.

This year the event will compete for the titles of Scotland’s Best Cultural Event and Best Large Event.

The winners will be announced at a glittering awards ceremony due to take place in Edinburgh on Thursday 15th September.

Derek Allan, chair of The Enchanted Forest, said: “This is excellent news and we’re delighted to be shortlisted in both categories. 2010 was the first event run by Highland Perthshire Community Interest Company – it was a record breaking year on a number of levels and these nominations recognise the hard work and commitment that has gone into the event by local businesses and individuals.”

Tickets for the 2011 Enchanted Forest event have already gone on sale and organisers expect to attract record numbers this year. The event moves to a new location this year, taking root at The Explorers Garden near Pitlochry, from Friday 7th October – Saturday 29th October.