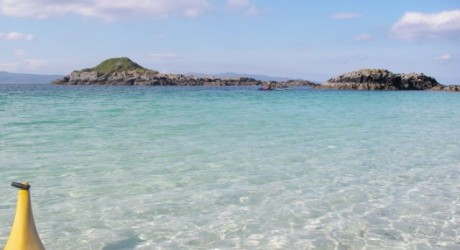 SEA-kayak Arisaig, one of the UK’s premier sustainable tourism businesses, has welcomed the support of the Scottish Government in promoting the growing market for ‘staycations’.

Says a spokesperson: “New research has revealed Scotland benefits to the tune of £1billion a year from home-grown holidaymakers, accounting for more than six million over-night stays, as they look for fun, adventure and relaxation on their own doorstep.

“The latest United Kingdom Tourism Survey for 2010 revealed a nine per cent increase in the number of overnight visits to destinations within Scotland by Scots and a 13 per cent increase in spending compared to the previous year.
“Scotland’s Tourism Minister, Fergus Ewing, has urged the country to exploit the ‘golden opportunity’ of the growing market for staycations and promised the government will work to ensure Scotland is promoted across the world in key and emerging markets.
“It’s not just stay-at-home holidaymakers fueling the boom as Scotland has also seen an increase of seven and 16 per cent from German and Swedish visitors. Figures show there has also been an increase in the number of visitors from Australia.”
Says Steve Macfarlane, owner of Sea-kayak Arisaig and the Glenuig Inn on the spectacular west coast of Scotland: “Scotland is undoubtedly one of the best places in the world for outdoor activities and adventure holidays.
“As a country, we are recognised internationally as a first class tourism destination and we are seeing increasing numbers of sea kayakers, walkers and other outdoor enthusiasts coming to us from overseas.
“The staycation has become more than a passing fad created by the economic climate. More people have woken up to the possibilities of what’s in their own backyard which, coupled with a growing interest in sustainable tourism and of being fed up with airport delays, is encouraging home grown holidays.”
Sea-kayak Arisaig, situated just 35 miles from Fort William in an area described by National Geographic Traveler Magazine as the ideal setting for the only British entry in the Top 50 Tours of a Lifetime, caters for the growing demand among adventure holidaymakers for first-class out-door activities and fun-filled day trips.
Based at the award winning Glenuig Inn on the edge of the Sound of Arisaig it offers long weekend and mid-week skills development breaks which are run by fully qualified coaches able to teach or lead groups of varying standards from beginners with less than a BCU 4* Leader Award (Sea) or equivalent to experienced sea-kayakers.
For more information on Sea-kayak Arisaig or Glenuig Inn please visit www.seakayakarisaig.co.uk or www.glenuig.com or contact Peppercorn PR on 0845 217 8757 or email news@peppercornpr.com
MEDIA RELEASE posted by Peppercorn PR. You too can post media releases (aka press releases) on allmediascotland.com. For more information, email here.