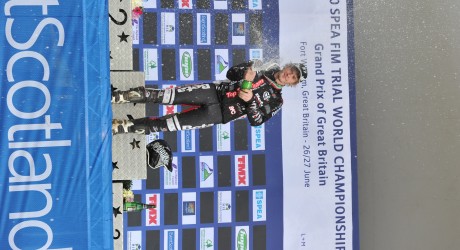 THIS coming weekend sees the 2011 SPEA FIM Trial World Championship arrive in the lochside town of Fort William, in the Scottish Highlands, for the sixth round of the series.

Located one hundred miles north of Glasgow this is the second time this venue has hosted the British Grand Prix in as many years.

Britain’s Jack Challoner – Beta will be looking to use the added advantage of home support in order to record his result of the year as he continues his inaugural season in the World Pro class.

Says a spokesperson: “Since entering the SPEA FIM Trial World Championship paddock in 2007, 21 year-old Challoner has successfully advanced through the ranks, claiming the Youth and Junior titles in 2008 and 2010 respectively.

“A newcomer to the World Pro category at the start of 2011 Jack has already made his intentions clear with a string of determined performances.

“After recording two well-deserved seventh place finishes in France and Andorra earlier in the season, Jack currently finds himself eighth in the general standings, two points ahead of his more experienced compatriot Michael Brown – Gas Gas.

“After placing second on day one and first on day two in the Junior class at last year’s British GP and having recently completed the famous Scottish Six Days Trial in May, which takes place in the surrounding Highland area, Jack will aim to draw on his past experience of the traditional style hazards in order to produce a good result on home soil.

“With only five points separating Challoner from Loris Gubian – Gas Gas in seventh and with three rounds of the series still remaining, there is still everything to play for.”

Jack Challoner said: ‘I started the year aiming to finish inside the top six, I knew it was not going to be easy, but I did not just want to arrive in the World Pro class and not get the results. Finishing seventh in France and Andorra was great and I want to carry on improving my results in Scotland.

‘Last year, the British GP was brilliant and I can’t wait to return this year.

“Having home support behind me was awesome, it gave me so much confidence and motivation to record a good result.

“Because I ride for an Italian team I spend a lot of time in Italy and cannot compete in the British Championship, it is always nice to come home and ride in front of my family, friends and fans.

“So far, I have failed to finish inside the top six and that is my number one goal in Scotland.

“Riding the Scottish Six Days Trial was a unique experience but it is totally different from a World round and will not give me much of an advantage.

“The weather can change really quickly in the Highlands and the sections can become super slippery, though it is the same for everyone, I can’t wait to ride in Fort William.”

Whilst advance tickets have now closed, tickets will be available on the gate throughout Saturday and Sunday. Ticket prices are as follows:

For further information please visit www.ukworldtrial.com or call the event hotline on 0845 643 6756.

The inaugural SPEA FIM Trial World Championship held at Nevis Range in 2010 was a huge success with the spectacular setting creating one of the best events the championship has seen in its thirty-five year history.

World Pro – As the name suggests, this is the World’s elite – the professionals, the best on the planet.
World Junior – This class is for riders aged 16 to 23 years-old and is a feeder class for the top category.
World Youth – Riders in this class are restricted to 125cc machines, and must be aged 16 to 18 years-old.