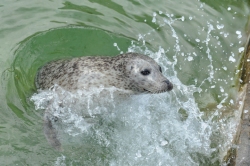 A LOVESICK seal that scaled a four foot-high metal barrier to welcome a new seal pup to St Andrews Aquarium has become an internet sensation around the world since a CCTV video of her flippery antics were posted onto YouTube.

Says a spokesperson: “The power of the internet saw the story reach news sites in far away destinations such as the Africa and the USA, putting the family run Aquarium at St Andrews in Scotland firmly on the global map.

“Security camera footage from the Aquarium showed the 90kg seal making several unsuccessful attempts to scale the barrier fencing, hampered by her sheer size and physical make up.

“However, despite physical challenges, Laurel took only around ten minutes to master the art of ladder climbing using just her front flippers to hoist her large, heavy body onto the top of the barrier, before wobbling slightly and eventually toppling over the fence to the other side to meet Togo.”

John Mace, manager of St Andrews Aquarium, said: “We’re amazed at the interest there has been in this story, not just locally but internationally. The YouTube hits are just going up and up so it’s clear that people are spreading the word through social networking sites and quickly!

“We’ve had a lot of visitors in over the weekend to see Laurel and Togo playing together and I believe that one of the local ghost tours heard about the story through Twitter and has now included Laurel’s Quest story in their regular act.”

Togo and Laurel are now happily playing together having spent most of last week getting to know each other properly.

Aquarium bosses have removed all ladders from easy seal access just in case Laurel decides to make her recent attempt a regular occurrence.

The video of Laurel’s Quest to meet Togo is available on YouTube at http://bit.ly/qpbmRx.