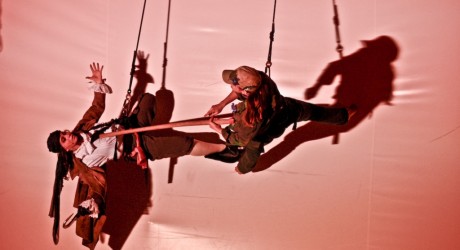 YOU are invited to send a photographer / reporter / camera crew to a photocall at Leith On The Fringe, Out of the Blue – Drill Hall at 30-38, Dalmeny Street, Leith (on Thursday 4 August at 14:35) for ANGELS Aerials’ breathtaking acrobatic aerial adaptation of J.M. Barrie’s classic Peter Pan; that runs at the venue from 5 – 28 August – Not Mondays (previews 3 & 4).

What:
In full Pirate and Lost Boy costumes ANGELS Aerials will perform extracts from their aerial adaptation of J.M. Barrie’s classic Peter Pan.

Direct from a sell out tour in Germany, the ANGELS perform an incredible aerial acrobatic display; flying through the air, running up the walls, and swooping over the heads of their audience (with exciting sword fighting too); taking  their audience on a journey through the air and into the dreams of childhood.

Children in the audience are invited to sit on the stage and the action unfolds over their heads!

A thrilling action show for the whole family and children of all ages.

Where:
Leith On The Fringe, Out of the Blue – Drill Hall at 30-38, Dalmeny Street, Leith. EH6 8RG
Leith on the Fringe Tickets – http://www.leithonthefringe.com

Aerial theatre show and flying workshop for children aged 6+ and the whole family. The ANGELS perform an aerial acrobatic display; flying through the air, running up the walls, and swooping over the heads of their audience.

Have you ever dreamt of flying like Peter Pan? ANGELS Aerials make it possible. With their breathtaking aerial adaptation of J.M. Barrie’s classic tale they take you on a journey through the air and into the dreams of childhood.

Join the adventure, the sword fighting, and the magic. Children in the audience are invited to sit on the stage and the action unfolds over their heads!

Any soothing words are in vain, Peter Pan never never wants to grow up. And why would he learn his sums instead of searing through the sky with the Lost Boys? But Peter Pan has bigger problems: he has lost his shadow. And if that wasn´t enough trouble his all-time enemy is in hot pursuit – the most vicious pirate of all times: Captain Hook until he has young Peter in his grasp!

But where is Peter?

Direct from a sell out tour in Germany ´ANGELS Aerials´ bring their thrilling, family show to Edinburgh for the very first time.

A must-see for children, parents, grandparents and everybody who still dreams of flying…

Join us after the show for a flying workshop, suitable for children aged 6+, and learn to fly like Peter Pan!  Booking essential.

Susanne Beschorner is the artistic director of ANGELS Aerials. Susanne wears many hats and is the choreographer; writes and produces the pieces as well as performing in them.

Susanne studied dance and physical theatre at German Sports University Cologne and completed her education at LABAN London with an MA in Choreography and Dance studies and perfected her aerial skills with internationally known companies such as De La Guarda, Fuerzabruta and La Fura dels Baus.

In 2003, Susanne founded Germany´s only aerial Theatre Company: ANGELS Aerials. The following year saw their first production, ‘Angels – the show from the sky’.

The show was a resounding success and the company were invited to the Dortmund Theaterzwang festival.

Since then, the repertoire has grown and in 2008 Susanne and her ANGELS were part of the flying VW Olympic Showcase during the Olympic and Paralympic games in Beijing.

Playing with the worlds between movement and the spoken word, earth and air, reality and imagination Susanne has created a unique performance language that makes ANGELS Aerials a very special experience.

Special ideas need creative solutions. Susanne provides the artistic drive and Markus Krökel delivers the technical wizardry that allows the performance to happen as if by magic … and safely. As the aerial designer, Markus must consider a design that could require up to 1,000 metres of rope. Artistic vision meets technology. As a certified rigger and a mountain climber in his free time, Markus is able to adapt and develop his own solutions to a design constantly. As chief rigger, the sure flight of the ANGELS lies in his hands.

Right after the show the audience can touch the stars! Under the careful instruction of the Peter Pan aerial team you are invited to reach for the sky and soar above the stage!

Spaces for the workshop are limited.  Please book in advance to avoid disappointment.