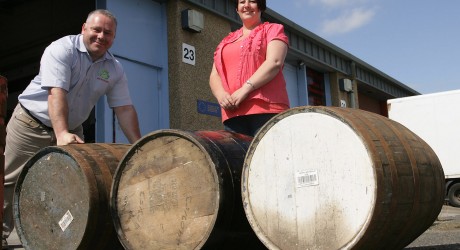 A COALFIELDS charity is throwing down a £100,000 challenge to would-be entrepreneurs to start their own businesses to help tackle the scourge of unemployment in former mining towns and villages.

The Coalfields Regeneration Trust hopes its Coalfields Community Challenge will identify up to ten viable business ideas which will share support from the £100,000 fund including a top award of £50,000 to help get the new enterprises off the ground.

The top ten applicants will get VIP treatment including three months mentoring, and a weekend long Boot Camp to prepare them to pitch their ideas to a Dragons’ Den which will select the winning project.

Nicky Wilson, Scottish Trustee of the Coalfields Regeneration Trust, said: “Research shows that former mining areas are still suffering from the devastating effects of the collapse of the mining industry more than a decade ago.

“Unemployment is higher than national averages, health is poorer and less people start their own businesses.

“But we know that the talent, enthusiasm and entrepreneurial spirit is there… it just needs the encouragement of an initiative like our Community Challenge to bring it to life.”

Mr Wilson said that the people living and working in former mining areas are at the very heart of the initiative.

The Trust hopes to encourage more people like entrepreneurs Frankie Hodge and Jackie Dunsmuir who started a social business, Recycle Fife, with one small van seven years ago and now employ 20 people with a turnover of £500,000 a year.

The couple have since launched Barrel Crafted a new business recycling used whisky barrels into small gifts and furniture initially creating jobs for two joiners and a designer, and training opportunities for ten people, all with the help of an initial £45,000 grant from the Coalfields Regeneration Trust.

Jackie Dunsmuir, who will mentor one of the ten best entries, said: “The Coalfields Regeneration Trust already does a fantastic job helping people like us get new enterprises up and running.

“We just wouldn’t be where we are today without their help. Now they are moving up a gear to help even more people turn their business dreams into reality, and improving employment levels in their local communities.”

Pauline Douglas, the Trust’s operations manager in Scotland. said: “We are spending over a £1m this year supporting local organisations through our traditional grant-making programme.

“However we have to do more than simply support those who come to us. We hope the Community Challenge will inspire those who live in former mining towns and villages to realise their own potential and improve the quality of life in their communities.”

John Oates, chief executive of Brag, the Fife-based business development and training organisation which specialises in encouraging entrepreneurs, said: “This is a first class initiative on the part of the CRT to unlock the tremendous pool of untapped talent in ex-mining areas.

“I am sure it will come up with some first class business ideas.”

Full details of how to enter by the closing date of September 9 are available on the CRT website at:

Issued on behalf of the Coalfields Regeneration Trust by John Scott of John Scott Communications.

MEDIA RELEASE posted by John Scott Communications You too can post media releases (aka press releases) on allmediascotland.com. For more information, email here.