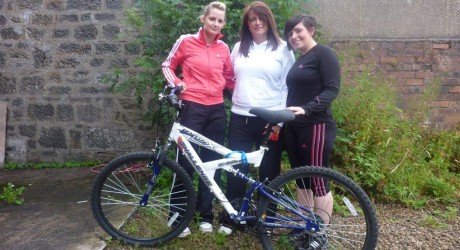 THREE women are resorting to pedal power to raise funds for a charity which supported the family of one of them when her guardsman brother was murdered almost two years ago.

Kelly’s brother Paul was stabbed to death near Lochwinnoch in October, 2009, as he sought to defend his mother, who had been assaulted by two men.

One of the men was subsequently jailed for 20 years for the killing.

Kelly said her family had been devastated by Paul’s death and had never really recovered. Her mother, Anne, had lost her job, was nervous about leaving her home surroundings, and that they had never really had any closure.

Kelly added: “Victim Support Scotland has been a beacon of hope for my family.

“The staff of the Renfrewshire service have been towers of strength and we wanted to do something to demonstrate our gratitude.

“To know that such a caring organisation is there for victims of crime when they are most needed is something which we hope lots of people will feel able to support.”

Hayley said that she and her husband had just returned from a honeymoon trip to Australia, New Zealand and Fiji but the trio were determined to train for the event and do well in Paul’s memory.

Free to use pictures are attached.

The caption shows (from left to right) Kelly, Hayley and Ashleigh.

A picture of Paul in uniform is also available.