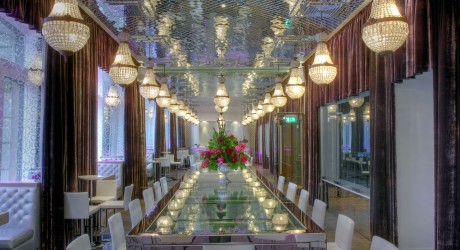 THE Corinthian Club ( www.thecorinthianclub.co.uk) celebrated its one-year anniversary with a spectacular 72-hour party at the weekend.

Over 10,000 socialites descended on the stylish venue in the heart of the city for a thrilling mix of fashion, music and foodie entertainment.

Highlights included a pop-up fashion show, which caused a stir as models strutted the new season’s trends throughout Teller’s Brasserie across the weekend.

London beauty experts, Filthy Gorgeou,s also took over the decadent Boutique room on the Sunday afternoon, treating guests to complimentary pampering and grooming. While The Corinthian’s legendary Studio 191 club-night finished the weekend off in style by raising the roof with club anthems.

Twenty cast and crew of Brad Pitt’s World War Z film also took time out to eagerly join in the celebrations by booking in for dinner on Saturday – proving that The Corinthian is THE destination venue of choice.

Following an eight month multimillion-pound refurbishment in 2010, The Corinthian re-opened the doors to its iconic Grade-A listed building on Ingram Street in August last year. With its re-vamped, glamorous new look and vast mix of entertainment offerings across four floors – it fast became a hot favourite with locals and visitors alike.

And, what a year it’s been: In just 12 months the venue has played host to some of the most impressive events and celebrations to grace the city.

From 6ft supermodels strutting the catwalk to TV crews queuing up for filming access; and from celebrities like P Diddy and Shakira partying hard at the venue to Hogmanay 2010 party tickets being like gold dust – The Corinthian Club is undoubtedly the place to see, and be seen.

Michael Bergson, general manager at The Corinthian Club, said: “The celebrations went off with a bang and we were thrilled to see so many friends and guests come along and enjoy themselves.

“From hosting parties for the likes of P Diddy to flying the American flag for Brad Pitt’s new movie, so many exciting things have happened in just 12 months at The Corinthian! We’ve undoubtedly had a first year and birthday party to remember – setting the tone for another successful year ahead.

“We’re looking forward to welcoming even more people through the doors this year. Open 24 hours, seven days a week – we have something to offer all tastes and moods, whatever the time of day.”

Here’s a taster of what’s gone down in just 12 months:

When MTV Crashes brought hip-hop legend P Diddy and his collective Diddy – Dirty Money to Glasgow last year – there was only one place for the after show party. They hired their own private room at the venue – Langley – but curiosity got the better of them and they were soon partying Scottish stylie with everyone else in The Corinthian – causing mass excitement and buzz in the city for weeks.

The Corinthian’s dazzling Boutique Room is the perfect fashionista retreat and with a stunning 8ft catwalk, its fashion shows have become celebrated events at the club. So, when The Professional Football Association Awards 2011 selected the room for its aftershow party and put on a risqué midnight lingerie fashion show, a precedent was set for more show stopping to come.

Global superstar Shakira graced the venue in December with her presence on one of The Corinthian’s busiest nights of the year to party in style – guests tried to get close, hoping for a glimpse of her famous belly-dancing Latino moves.

Mark Cooper broke a treadmill record in July this year in the Boutique Room with a 24-hour marathon for Parkinson’s charity Wobbly Williams – he kicked off with a photocall with Miss Scotland and then went on to smash the current record by running 129.2 miles – just shy of five marathons and raising thousands for the charity.

Open 24 hours a day, seven days a week, with a variety of characteristic meeting and event rooms alongside decadent bar, dining and game facilities, The Corinthian Club is the ultimate place to meet, socialise and celebrate in the heart of Glasgow.

Those who prefer to step past the velvet rope and get closer to their favourite place to be can become a special Friend of the Corinthian and look forward to priority entry, exclusive invites to private events and regular news updates.

MEDIA RELEASE posted by Stripe Communications. You too can post media releases (aka press releases) on allmediascotland.com. For more information, email here.