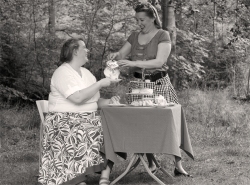 ORGANISERS were today putting together the finishing touches for this weekend’s Turn Back Time @ Tentsmuir event which will see the launch this year’s Fife Outdoor Access Festival on Saturday.

The event, which is a World War Two themed outdoor access day, takes place on the 62nd anniversary of the start of the Second World War. It plays a significant role in Forestry Commission Scotland’s year-long celebrations for International Year of the Forests.

The forest is steeped in history, and the Second World War is no exception in its adventurous timeline.

An active Polish army camp was stationed there during the 1940s and is credited with installing many of the defences including the pillboxes which can still be seen to this day.

The sandy beaches at Tentsmuir would have made an ideal landing location for German invasion troops and the Fife coast needed defending.

The Polish soldiers constructed a camp and lived on site at Tentsmuir Forest and, even when they had finished the construction of the defences, many remained to man the guns and patrol the area.

Although, today, little remains of the dismantled camp where the Polish soldiers lived, if you look closely, impressed in the concrete wall of an old well, you can find the coat of arms of the Polish Army, a lion and an eagle. This survives as a reminder of the Poles who defended the beaches of Fife.

Turn Back Time @ Tentsmuir offers visitors a unique opportunity to enjoy the forest to the full, although with the flavour of the 1940s firmly infusing the whole event. From jitter-bugging to carriage rides, and cycling to guided walks, this event will truly bring the forest, its history and wildlife to life.

James McDougall, International Year of the Forests co-ordinator for Forestry Commission Scotland, said: “Turn Back Time @ Tentsmuir really captures the spirit of what the International Year of the Forests celebration is all about. Tentsmuir has a rich history and the 1940s is only one point in time, but the significance of the forest and its surrounding area during the war years only goes to emphasise why forests are just so important.”

Fife Outdoor Access Festival runs from Saturday 3rd – Sunday 11th September and offers an extensive programme of around 70 outdoor events for outdoor enthusiasts of all ages. Turn Back Time @ Tentsmuir has been supported by Forestry Commission Scotland as part of the UN’s International Year of the Forests year-long celebration and is run jointly by Fife Coast & Countryside Trust and Fife Access Forum.

The full programme of festival events can be viewed and booked online at www.fifeoutdooraccessfestival.co.uk or by calling 0871 288 5670.