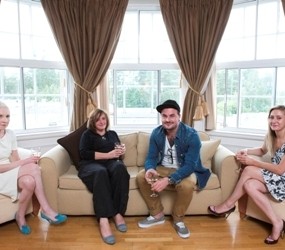 Design Collective Scotland has been conceived as a vehicle for the promotion of contemporary Scottish fashion design and a platform for nurturing fashion creatives in Scotland.

The four Design Collective Scotland designers, all of whom will showcase their Spring/Summer 2012 collections at London Fashion Week (16-20 September 2011), are: Iona Crawford; Di Gilpin; Emily Lamb and Marc Ross.

Marc Ross, of Design Collective Scotland, said: “Working as an independent designer can be very isolating and stifling, but since the formation of Design Collective Scotland, the four of us have been in contact with each other on a daily basis; we all feel we’re not alone any more and are reaping the benefits from being able to bounce ideas off each other and discuss various fashion initiatives.

“Whilst the aesthetics explored by each designer are diverse; collectively each of us share high-end, contemporary vision and principles so that the harmonious balance of talent, specialism and outlook coalesces to form a platform for a successful collaborative showcase.”

Cardonald College Glasgow is supporting the initiative by offering free access to unique workshop spaces in return for the opportunity for students to work alongside Design Collective Scotland designers, giving them direct experience of the London Fashion Week processes.

Students will be exposed to every aspect of the initiative, from sponsorship to event management, while making a direct and valued contribution to the manufacture of collections.

Dr Alex McCluskey, Head of Faculty, Creative Industries at Cardonald College Glasgow, said: “Scotland has frequently ‘punched above its weight’ in fashion and today’s young designers are no exception.

“You don’t have to look far to see their influence and I’m sure that Design Collective Scotland members will take their place as individuals and as a group at national and international levels.

“To show at London Fashion Week in their first weeks of formation will be an outstanding achievement and we wish them every success.”

Today’s launch event will feature models showcasing Design Collective Scotland womenswear and accessories salon style, as well as performances from up and coming band Kitty The Lion and a live DJ set by Ross McMillan.