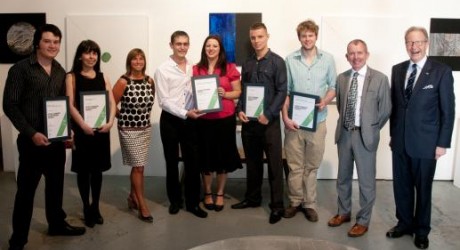 Professional boxer John McCallum has received a prestigious John Connor Award for business achievement.  He was one of six young Scottish entrepreneurs who received recognition for their outstanding achievements in business in the face of personal and social adversity.

John (fourth from left), from Edinburgh, took up boxing at a young age, inspired by his uncle who became a Scottish light-middleweight champion in the 1980s, competing against the likes of Clinton McKenzie, Lloyd Honeyghan and Gary Jacobs.  John, who has recently turned professional, has four British youth titles under his belt along with 13 Eastern and Scottish titles in the amateur ranks and a silver medal at senior level in the Four Nations. He has competed all over the world representing Scotland.

The John Connor Awards were established in association with The Prince’s Scottish Youth Business Trust and the Capital City Partnership in 2006 to support new business start-ups in the Edinburgh area.   Before his sudden death in 2008 Scots entrepreneur John Connor was actively engaged in supporting young people from disadvantaged backgrounds achieve their entrepreneurial ambitions.