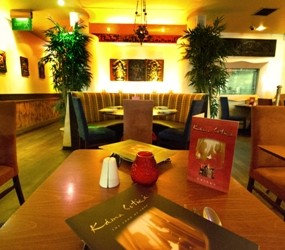 TWO of the four restaurants chosen by city diners to represent Glasgow in forthcoming UK Curry Capital of Britain competition are Kama Sutra Group outlets, confirming the popularity of this burgeoning restaurant empire.

The two restaurants in question are Kama Sutra and Slumdog Bar and Kitchen, both on Sauchiehall Street. Whilst Kama Sutra is long-established, the Group only recently took over ownership of Slumdog from Charan Gill MBE.

Kama Sutra and Slumdog represented two of the top four restaurants which received the most votes from a total of 78 Glasgow restaurants nominated. They will compete for the national title with cities from across the UK.

Rajesh Saraf, director at Kama Sutra Group, said: “The UK Curry Capital of Britain Competition is fiercely fought throughout the length and breadth of the country. It says something about the quality of Indian restaurants available in Glasgow that the city has won the title so many times before.

“And, given that Glasgow is already recognised as the Curry Capital of Britain, it is really quite a remarkable achievement for two of the top four restaurants chosen by city diners to be Kama Sutra group outlets. We are deeply honoured by this recognition and would like to thank everyone for their votes.”

As part of the competition, the restaurants will be invited to hold a special dinner in the lead up to the final with proceeds going to The Curry Tree Charitable Fund to help the poor and undernourished around the world. They will also be visited by a team of secret independent judges before the winning city is announced on 1 November.

The public now has until Thursday, September 22 to vote for Glasgow as the winning city at www.glasgow.gov.uk/currycapital. You can also vote by calling 020 8399 4831 or e-mail groveint@aol.com.

Next year, Glasgow could face stiff competition from Stirling for the title of Curry Capital of Britain as, following its success in Glasgow, the Kama Sutra Group will this month open a Kama Sutra restaurant at Upper Craigs, in Stirling city centre.